Fallon Fox will take on Tamika Brents, who has criticized Fox in the past.

Fallon Fox is the first professional MMA fighter to come out publicly as transgender. Her story, which first ran on Sports Illustrated and Outsports, has brought a flurry of support and backlash.

Fallon Fox, the history-making trans MMA fighter who came out last year, takes to the ring this Saturday, Sept. 13, in a Capital City Cage Wars match. She will be fighting against Tamika Brents, who has had a thing or two to say about Fox in the past.

I am tired of Fox getting all this publicity just for being a transgender fighter rather than having great skills. I think it's unfair anyway but as long as the opponent knows and accepts the fight then go ahead...

Brents will get to put up or shut up Saturday night.

Fox has had a lot of success since coming out publicly. She has had a mixed reaction from the crowds, with some cheering for her and some booing her. Whatever their reaction, that's one brave lady.

The match will be held at the Prairie Capital Convention Center in Springfield, Ill. Tickets start at $39. If you're in the area and have the time, definitely head over and cheer for Fox! 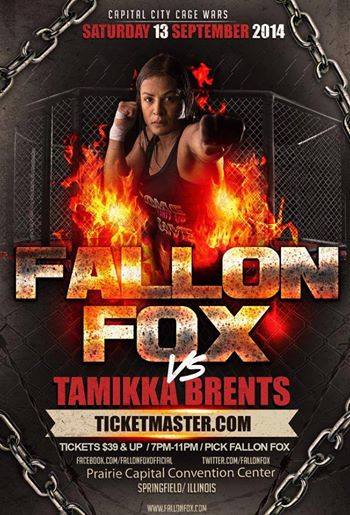