Christian Mays was bullied on his high school football team. He wanted to prove his doubters wrong by earning a spot with the Michigan Wolverines. In the process he strengthened his body, his mind, his self-worth and his resolve.

Share All sharing options for: This out athlete's journey to make the Michigan football team led him to embrace himself

Waking up at 4am and running several blocks in the middle of a frigid February is something far from normal for me. Then again, you could argue everything that lead up to this moment in my college life was just as impractical.

I was heading to Michigan football's Schembechler Hall for a tryout. As I entered the field, I laced up my shoes, did a few warm ups and said a final prayer before I put nearly 14 months of training to the test.

It's something that I know many athletes dream of doing. It's easy to say with hindsight that this goal was a long shot from the start: I didn't make the first cut, never played football at a Division 1 high school, nor did I have any career highlights that would warrant them choosing me. Looking back, I sometimes wonder to myself: What drove me to be that determined? It wasn't just about having the pride of wearing the Maize and Blue winged helmet, it was also about proving to friends, former teammates, and myself that my athleticism could triumph over my hidden identity.

It started several years earlier in middle school. Like many other students at that age, I realized kids can sometimes be cruel. In grade school one is either a popular student, gifted with athleticism and social skills, or considered an outcast. This was no different going to a private Christian school where you are expected to also be spiritually pure. That also applied to one's sexuality. 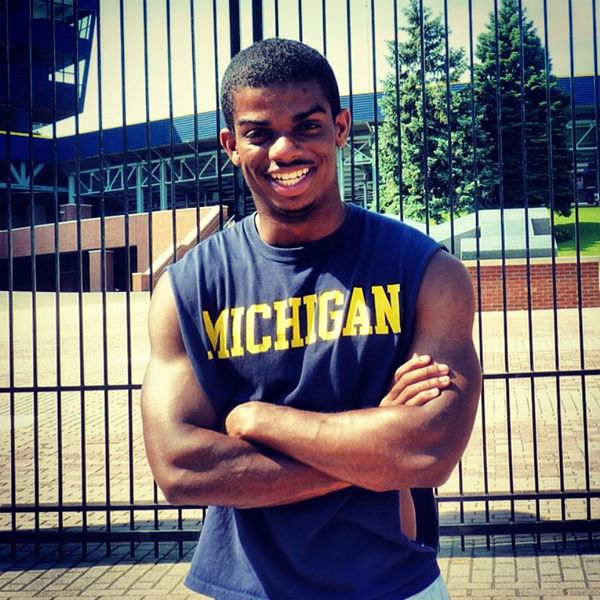 I had known since sixth grade that my sexual orientation was different from many of my friends. It didn't make it any better that I was a scrawny-looking kid with braces who had a love for politics rather than sports. I was hardly invited to hang out with friends, always seen as gullible, and could never get a girlfriend. That's when the slurs and bullying hit home. At times, I felt that it was just a something that the guys just did, calling everything "gay" and everyone a "faggot." But as the jokes became more personal, I could read between the lines. Because I felt outnumbered socially and physically, I couldn't do much about it.

As long as they continued to harass me, the more I felt I had to do everything possible to prove them wrong.

I thought about sports as a way to make me tough. Our school started its own football program and I grew interested. However, the same voices that would taunt me were just as loud trying to convince me not to join a varsity high school sport.

"You're too skinny, why would you join?"

"You don't know anything about football, you'd never make it past J.V."

Again, feeling cornered about how I'd be treated, I bitterly backed out. After freshman year, I became fed up with carrying the status quo. That summer I was determined to join the team. So I hit the gym. I spent countless hours studying plays and workout programs. I got to know the coaches and showed them I was determined to do what it takes to be on the team.

I knew I wasn't a star athlete or the most popular guy on the team, but all that mattered to me during those months before the season was making it and overcoming what many thought was impossible.

By the beginning of the season, I had seen significant changes in me physically and mentally. I gained a lot of strength and speed. I knew more about the game. I developed a better sense of confidence and mental toughness. Despite that progress, I knew that I was nowhere near the possibility of starting as a wide receiver or safety. Even with those setbacks and a losing season, the fact that people and coaches started to see me as a good team player gave me a sense of self-esteem that I never had.

Nevertheless, others on the team still saw me as a scrawny kid with braces who just didn't belong. They also saw me as someone easy to intimidate and one who needed to be put back in his place. They did just that.

The taunting continued. This time, however, I didn't make any attempt to overcome it. I actively tried to be a low-profile player, staying out of everybody's way.

Following a practice before a game in October, two guys cornered me and gave me a forced "swirly" in the locker room toilet. What made it worse was that several teammates saw it happen and did absolutely nothing but watch.

To cover up what happened, they told everyone else that I stuck my own head in the toilet or that I fell, and many believed them. I didn't even bother to tell coaches or my family at this point as I felt that it didn't matter. On top of that, it would be very difficult to prove as many that were involved were very well-liked by staff, friends and administrators. I didn't want to risk bringing anymore attention to myself.

The taunting continued. This time, however, I didn't make any attempt to overcome it. I actively tried to be a low-profile player, staying out of everybody's way.

As senior year approached, many players who bullied me were starting to get recognition and potential scholarships to play college football. It angered me, as I felt that they were getting rewarded for taking the joy away from a sport that gave me so much confidence. I felt robbed of actually having a chance to be a great student-athlete not only because of the harassment by my peers and teammates, but also do my internal struggle with my orientation and faith. I hoped that I would gain the confidence I need to finish senior year on as high of a note I could. However, once the recession hit my family hard, my parents could no longer afford to keep me at a private school and with that my high school career was over.

I was still filled with determination to get a better football experience than what I felt I had those few years in high school. I decided that I was going to do whatever it took to try to walk onto the football team of whatever university I attended. I continued to work out, and I joined the track team at the high school I transferred to in hopes of keeping myself in shape as I focused on grades and college applications.

Eventually, I found out that my grades paid off with an acceptance to my dream school, the University of Michigan. From that point, I knew that attempting to walk onto the storied Michigan football team was going to be a tall order. At the time, I commonly heard success stories about being a walk-on player at Michigan where athletes such as Jordan Kovacs served as examples of Michigan man.

I didn't feel confident enough to walk-on freshman year, let alone know what the process was to get an invite to do so. Once sophomore year came around, I started training with one of my friends who was also interested in walking on and had no prior experience in high school football except rugby. During the months of fall training, I started to regain my confidence and felt that I would have the shot of a lifetime to walk-on and to fulfill a dream. I wanted to put my past, and my identity, behind me.

When tryouts came, I put my best effort forward. I came up short.

I didn't need to be a college athlete, I just needed to embrace myself.

I was depressed that I didn't make the team. I felt those people who said I could never be an athlete were suddenly right. But I refused to let that happen. I still felt that I had one last attempt in me despite the decreased odds. As I made it aware I was going to try out I asked for advice and support from other former and current players. I knew that no matter what the odds were, the support I received from Michigan players and friends was invaluable. It reignited the reason for why I wanted to do this so badly.

Once February 2013 came, I found myself at Schembechler Hall again. Before we began the drills, I took a moment to recall what brought me here: all the hurt, all of the ambition, and all of those naysayers. I used all of the negativity I experienced and turned it into something positive. No matter what direction this went, I already silenced those who wanted to silence me. I was by chasing my dreams. I left everything I learned and trained for on the field that day. I never felt such relief.

Although I found out that I still didn't make the cut, I came to peace with what happened. I accomplished what I had really always set out to do: find acceptance within myself. I realized that I overcame many obstacles, evolved from a "scrawny nerd" in high school to a serious candidate for college football. 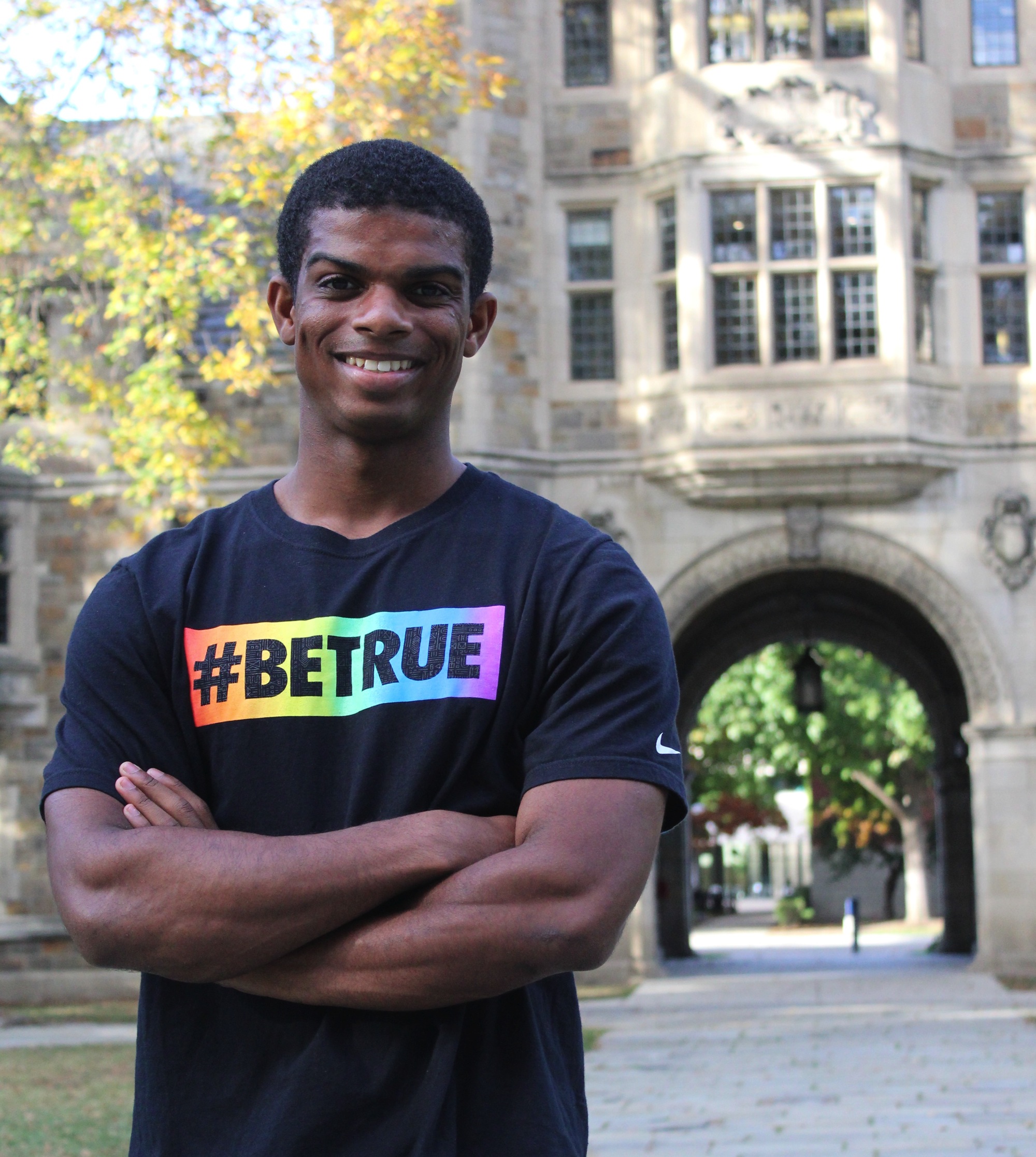 I didn't need to be a college athlete, I just needed to embrace myself.

I took this new-found look on my life to a new level. While I still kept up my workout habits, I turned my energy to a healthy balance between politics and sports. At the University of Michigan I was elected to student government where I worked to bridge gaps between minorities and underprivileged groups like the LGBT community. For the first time in my life I felt like I had finally found a purpose.

I graduated from Michigan with a degree in political science. I also received accolades from Business Insider as one of the top graduates of the class of 2014, counted amongst the ranks of distinguished people like Michael Sam.

I found the courage to come out last month. It brought my journey full-circle. Leading up to my decision to come out, I realized that I was more comfortable in my own skin. I didn't feel like I needed to prove my masculinity or capabilities to anyone but myself.

I just needed to embrace myself. In doing so, I ended up being my own valiant victor.