Gay Oklahoma Sooner cheerleader struggled with stereotypes before coming out

Drew Allensworth grew up in rural Oklahoma thinking he could never come out. Now he's been accepted by his fraternity and athletic department at the Univ. of Oklahoma.

Share All sharing options for: Gay Oklahoma Sooner cheerleader struggled with stereotypes before coming out

Coming from a small town in Oklahoma, being raised on a farm and in church every Sunday, makes it pretty much impossible to be gay, right?

I fit the bill, having grown up in Vinita, Okla., a town of under 6,000 people an hour north of Tulsa. I am now proudly a Sooner cheerleader at the University of Oklahoma. Of course you'll say, "Oh he's a cheerleader, that explains it." I know many people have the stereotypical idea of male cheerleaders being gay, but that couldn't be more wrong. Only a few of the 60 people in the OU program are gay. The rest of the men on the team are married or in serious straight relationships.

Many gay or questioning male cheerleaders have just as much of a struggle accepting their sexuality as anyone else in the world. In fact, it almost makes it worse. Everyone assumes a male cheerleader is gay as soon as he puts on that uniform. Human nature drives us to prove differently, especially if we're already struggling with it.

Ever since I started having sexual thoughts, I knew I was different from most of the guys on my football and track teams. Yet I knew in such a small town there was no way I could be gay. Where I grew up everyone knew everyone, and there was no way a gay kid would be accepted on a sports team. Even though I was an outstanding athlete, in small-town Oklahoma that just wouldn't work. At least, that's what I thought. My family wouldn't accept me, I would be shunned from my church, and there would be no way I could continue as an athlete. I was a track star, a football star, and the son of the town bank President and CEO. My grandfather is the town doctor. There was no hiding.

Growing up I attended gymnastics at a local gym. I loved tumbling, yet there came a point where my parents decided it was time to focus me on football, basketball, baseball and track. All the "guy" sports. I tried to be interested in women all through school, but it simply was not working. Don't get me wrong, I enjoyed it and I'm pretty sure I fell in love with one of the girls I dated. But I knew it wasn't right: I loved her as a person, not romantically.

Tanner Williams grew up a Southern Baptist and struggled with his sexuality. He says pole vaulting and God saved him. He celebrates his wedding anniversary in June.

Basketball player comes out to team in Oklahoma

When I was in the 10th grade we broke things off and became great friends. I ended up dating someone after her who was from out of town. Everyone knew her as "Jenny" in my phone, but I knew him as Michael. It was the first time I had been in a relationship with a guy. It helped me understand that these thoughts I was having were true. People quickly got suspicious as to why they hadn't met "Jenny." We continued dating undercover in high school for about nine months.

My family had a long tradition at OU, so I wanted to be an athlete there. I simply was not big enough for OU football. And I thought the same for OU track. So during my senior year in high school I decided to dust off the old tumbling shoes and try out cheerleading - If I was going to make the Sooners squad, I had to start now. I ended up falling into a relationship through the Twist and Shout CO-ED Competitive cheer team. It was short lived, but it got me into more trouble than I expected.

My mother was on my computer one evening when she came across pictures of me and my then-boyfriend. Nothing R-rated, but definitely not normal pictures that straight guys would send each other. I had no idea what to say. This was a huge ordeal for my family, and my parents did not understand it all. Heck, I barely understood it. But they came around and my Father is my number-one advocate now.

Heading into my freshman hear at Oklahoma I tried out for OU Cheer and made the team! That started pretty much immediately the summer after my senior year in high school with summer camps and appearances. It was a blast. At summer camp I met the love of my life. He cheered for Texas, and I was star struck the first time I saw him. I knew there was no way he could be gay, but he was some great eye candy for the week. After we packed up for camp and were on our way home, I got a Facebook friend request from him, followed by a message. The message was very vague at first, yet he kept messaging back.

Before I knew it I was driving to Austin or having him visit me in Norman. Suddenly I was having a stranger from Texas visit me clandestinely in my fraternity. After our first year of dating I was ready to come out, but he wasn't. I could not be tagged in pictures with him, let alone take pictures with him, because he was in an even deeper closet than I. He was an amazing boyfriend, yet when asked, he was nothing more than a good friend of mine because "we grew up hunting together." 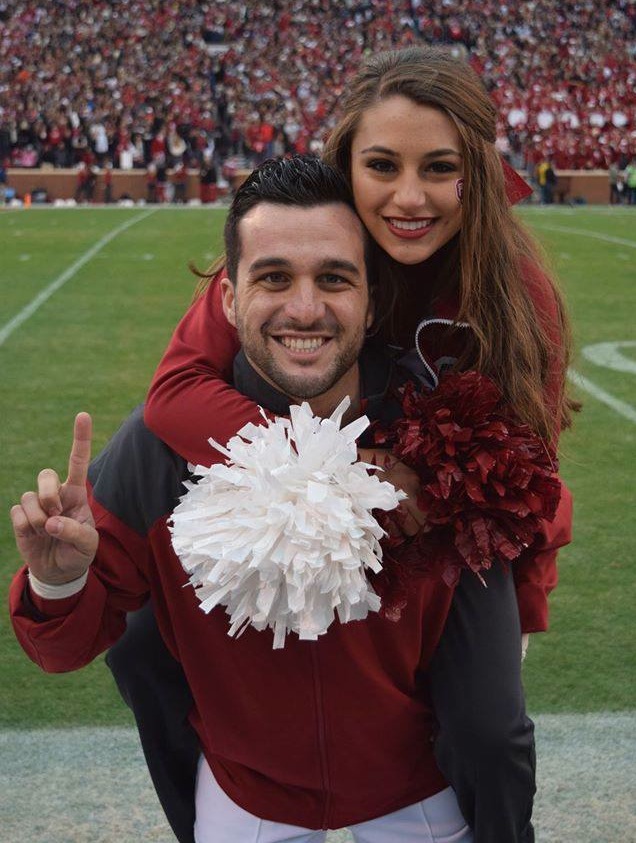 This took a huge toll on our relationship and me. After three years of dating I demanded I meet his parents and shake his dad's hand, just as he had mine. He wasn't willing to go there. The relationship ended then.

Now I am openly gay on OU's campus, and I do not get weird looks or discriminated against. Once I came out I got nothing but love and support. For every hater there are 10 people who have my back. The cheer team loved me regardless, my fraternity brothers loved me regardless, and fellow athletes did not seem to care one bit. Sure they could have been more careful with not making fun of gays, but overall I did not get treated differently.

My coach has been amazing. He has accepted me totally. One day we were talking about my ex at Texas, and coach was awesome. "He's a great guy" was his response. I was dumbfounded that my coach didn't think anything of it or give me a funny look. All along I was thinking "you know were in Oklahoma, right?"

Many people think the University of Oklahoma is such a hard place for gay people. When you realize that the stupidity of the Oklahoma law makers is not how this campus is run, it isn't a bad place to be.

Yet it is really hard to be stuck in the closet with no support system, thinking you will be outcast by your state, no matter where you are. The issue is not my university or that I have a name to uphold and be straight since I am an athlete at a D1 School, the issue is rather the ignorance of my state and its lawmakers. That is where there is no support.

I am a strong Christian who attends church on Sundays. For those who do have a problem with gay people, I ask them to close their eyes and deeply think why it is they have a problem with homosexuality without using the words "Bible," "religion" or "sin."

My sexuality is between God and myself.

I have a roommate who told me before he met me he would have considered himself a homophobe, and now he is one of my best friends. This University has been nothing but a web of support and I would not change my experience for anything.

I strongly encourage gay people come out when you feel the time is right. There is nobody who knows this better than you, but know when the time comes if family is giving you trouble with the issue, your friends and teammates will support you and if they do not, they were not true friends in the first place. Teammates will understand that you are not trying to look at them in the shower, or trying to get with them. In the end they have been playing these sports with you all along and have been showering with you all along.

Dr. Martin Luther King Jr. once said "hate cannot drive out hate, only love can do that." If you get funny looks or are discriminated against or overhear a bad gay joke, drive out that hate with love and kindness. Don't let them put you down, shower them with kindness.

I still think a lot about my ex from Texas. If you are in a relationship with someone in the closet, please be kind and helpful to them. This time is very hard for them, just as it was for you once. You may not understand why you're getting so fed up with it, and you may not want to put up with it anymore, but those people need you. If you aren't there for them, you will spend forever wishing you had been there and been more understanding.

I do not know why "coming out" is even a thing. Yet the fact of the matter is, we do have to come out, and with that being the case, I pray it is as easy for you as it was me. Find your true friends and confide in them deeply. Step by step you will find that nobody who truly loves you will truly care.

Photo above is of Allensworth with fellow OU cheerleader Katie Fikaris.