A new documentary film about two LGBT athletes is hitting the film festival circuit and promises to be a crowd favorite. Game Face, which has its world premiere in Miami April 26, features trans MMA fighter Fallon Fox as she struggles with the decision to come out publicly and the tumultuous aftermath in the MMA world. Fox's story is a powerful one, and the film's producer and director, Michiel Thomas, was there through it all.

Yet it's another athlete - college basketball player Terrence Clemens - who is introduced to the world for the first time. Clemens most recently played basketball at Northeastern Oklahoma A&M College, where he came out to his coaches and team. Game Face chronicles that process and gives an intimate portrayal of a closeted athlete navigating team dynamics and the result of sharing his true identity. Now Clemens is preparing to play for a new college and reflecting on the incredible path he took to get here.

Clemens' story is a complicated one. Growing up in poverty-torn South Central Los Angeles, he faced many of life's imaginable hurdles. Raised by his great-grandmother, he at times had to travel an hour to Artesia High School, where he studied and played on the basketball team. He never went hungry, but they never had money to do more than just what was barely enough. Nike basketball shoes were not part of his uniform.

Yet little in Clemens' life has impacted him more than the rejection of his sexual orientation by some of those closest to him.

The night his mother learned of his sexual orientation was a powerful moment. Her anger - driven by frustration and misunderstanding - came through in a tirade that left an indelible mark on a teenage Clemens. There were times when he thought ending his life would make his life a whole lot easier - that night was one of the many.

Yet it was also in that tumultuous moment with his mother that Clemens saw his first light at the end of the tunnel. His great-grandmother heard his mother yelling, and she inquired about the fuss.

"My grandmother said, 'if he's like that he's not the only person like that.' She was the first person to ever tell me she accepted me for who I am."

Since then more of his family and the people closest to him - including his college basketball team - have learned what was once his secret truth. Whether it's been outright opposition, superficial support, or true-hearted embrace, Clemens is breaking free of his past and mapping out the future that best reflects who he is as a person.

"I want to focus on finding out who I am. Most of my life I've been living for other people, not wanting to disappoint people who couldn't care less about me. I want to focus on my life now and find out what's important to me."

Clemens got a real wake-up call several years ago when he was charged with and convicted of a Federal felony. He spent nine months at Levenworth Detention Center, a maximum-security prison in Kansas, for conspiracy to commit access device fraud, a white-collar crime involving stolen credit cards. Clemens had plead guilty to avoid a potential five-year sentence.

Prison was a familiar place for his family. His father spent most of Clemens' life incarcerated. Life after parole was also familiar. Expectations dictated that Clemens get a low-income job, find a girlfriend and settle down - at least, until he found himself in prison again. That's what young men like him were supposed to do, and that's the path people around him were paving for him as he left prison.

Yet Clemens knew he wasn't just like most of the other young men. He would have to find his own direction. 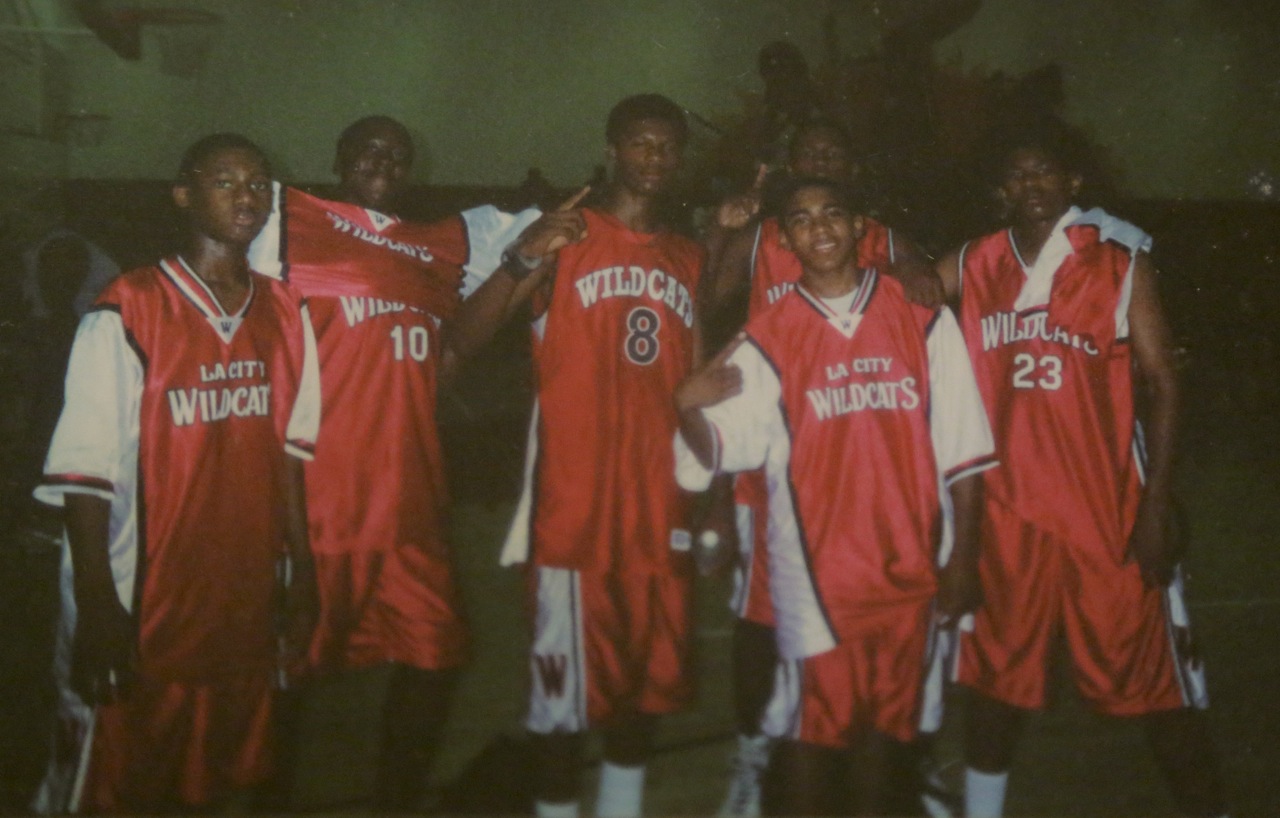 Terrence Clemens (far left) played on the L.A. City Wildcats traveling team with James Harden (No. 10), whom Clemens said wasn't the spark plug of the team in high school. Harden has gone on to a successful NBA career. Clemens would still like to play professional basketball overseas.

As a teenager Clemens had held high hopes for his future. He was a star basketball player at Artesia High School. Growing up at Slauson and Fifth in South Central Los Angeles, Clemens and just about every other young man received constant messages that there were three ways out of their poverty: Drugs, music and sports.

Clemens was raised in a small home by his great-grandmother, who had played basketball when she was younger. So he chose basketball. He embraced basketball. He woke up at 4:55 every morning to hit the court before school, also practicing after school then going home and playing more basketball.

Even with his loving great-grandmother and a helpful aunt and uncle, there was a solitude about Clemens that was inescapable. His father spent most of Clemens' life in prison; His mother was in his life but not his primary care-giver.

"It wasn't as bad as most movies make it. It wasn't that bad. I did get into fights a lot thought. I take a lot from people. I let them get away with a lot. And at some point I'd get fed up and I'd lash out and fight. That's the only thing that I knew."

Through it all, there was basketball. Clemens was a rising star in Los Angeles, traveling to tournaments with the L.A. City Wildcats. He counted as his teammates NFL prospect Kenny Rowe, former Univ. of Washington cornerback Anthony Boyles and NBA star James Harden. Ahead of him lay a future like these men, his sites set on being a professional basketball player.

Five gay closeted college basketball coaches talk about the deep-seated homophobia and forced lifestyle contracts that are driving them to suicidal thoughts and out of their profession. Right now, no one is doing anything about it.

gay on his Catholic college's basketball team in Kansas. And he goes on more dates than his teammates.

His godfather, Carl Hillery, saw his rising-star godson and brought him to live with him closer to his high school. Suddenly he was living in a more comfortable home focusing more on his studies and his sport and less on traversing across Los Angeles on his daily commute.

Basketball lifted him out of Crenshaw.

Prison halted all of that. Anyone with a rap sheet finds it hard to break through. After his release from prison he faced the daunting task of building a new life for himself. A Federal felony on the record of a black man from Slauson and Fifth has a way of driving life expectations from low to non-existent. People around him let him know that.

"I didn't know what to do with my life. All people told me was to get a job."

Yet inside him was still the same kid from Audobon Middle School dreaming of a long future in basketball. Beyond basketball, he knew his future would be brightest with a college degree. He simply didn't want to drive trucks for UPS or sweep floors at a local high school. There was nothing wrong with those jobs - many of the people around him growing up did those very things. It simply wasn't for him.

Shortly after his release Clemens tracked down basketball coach Brian Allen at a local 24 Hour Fitness and convinced Allen to help him get back into basketball. At the time Allen didn't coach basketball players without college experience. Clemens persisted and Allen brought him into his fold.

Allen saw the potential in Clemens and introduced him to another coach, Nick Posner. Posner worked with Clemens and ultimately reached out to the coaching staff at Northeastern Oklahoma A&M College, an NAIA program 90 miles from Tulsa.

It was in college that Clemens started opening up more, sharing his sexual orientation with coaches and teammates his final year with the team. It was hard enough opening up with friends and family in Los Angeles, but Clemens had real reservations about doing it in a town of 13,000 in Oklahoma. 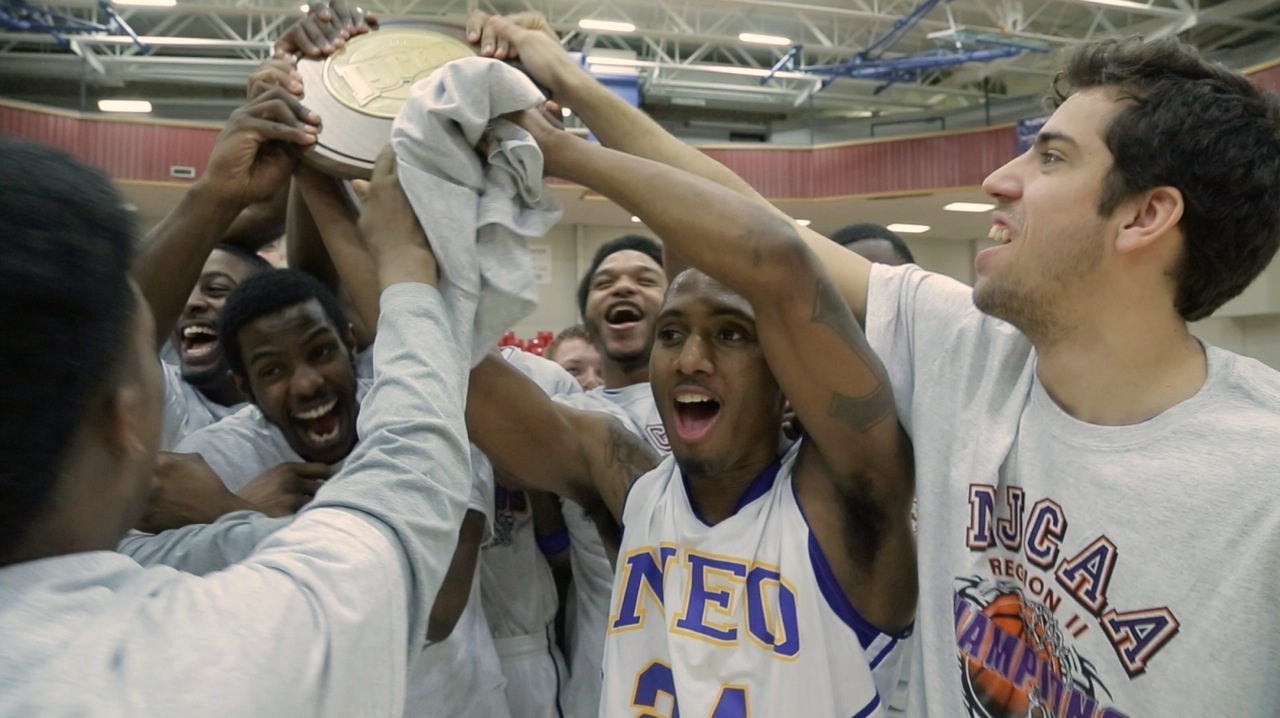 The response from everyone in his Oklahoma basketball family was positive. The response from his teammate and roommate, Uter Moukimou, was particularly warm. Coming from the Republic of Congo, Moukimou told Clemens he could not have a gay friend. While gay sex has never been criminalized in Congo, that is the only legal protection for LGBT people in the country. Moukimou told Clemens that he reflected on their friendship, that Clemens had always been good to him coming from another country and culture, and that he would love and accept his first gay friend.

The Game Face documentary chronicles Clemens' coming-out process with his college team in a powerful way.

Now with an associates degree in general studies on his resume, Clemens is headed to Johnson & Wales University in Denver, Colo., where he will pursue a bachelors degree - and play basketball. He'll do so as a fully out, openly gay man. While basketball will be a big part of his college experience, he has become more reflective about the sport and his involvement in it.

"When I was younger I thought I wanted to play basketball because I wanted to be the best basketball player in the world. But the real reason I played basketball was because I was living in poverty. And those kids grow up believing that playing sports or selling drugs or making music are the ways out. I wanted to pursue that to provide for my family. Now, after finding out my family doesn't back me, that drive is gone. I want to do things that make me happy. Basketball makes me happy because I've been playing it for so long and because I'm great at it."

He still hopes for a long future in the sport, possibly playing professional basketball somewhere overseas. He has all the confidence he needs, at one point begging for a one-on-one matchup against his old teammate James Harden.

"Set that up and I'll show you how well I can play."

"Parents don't have a book on how to be a good parent, and there isn't a reset button when mistakes are made. Sorry doesn't fix it."

Sharing his story now on Outsports and in Game Face is part of forging that new path for himself, one that he hopes will bring him closer to his other passions in life and help him make the world a better place.

"I found out I have a passion for helping kids. It's not just gay kids, it's all kids. Kids in my community or any community that don't have the proper tools to get ahead in life. Parents don't have a book on how to be a good parent, and there isn't a reset button when mistakes are made. Sorry doesn't fix it. I want to be there for kids now so we don't have to say 'sorry' later."

Clemens knows what that's like. He knows the behind-bars life that leads to. And he knows how tough it is to break that cycle. Despite a tough childhood and a void of family support, Clemens is helping others do the same with his voice, his actions and his example.

'Game Face' will world premiere at the Miami Gay and Lesbian Film Festival. The screening will be held on Sunday, April 26 at 3.15pm at the Regal Cinemas South Beach, 1100 Lincoln Road, Miami Beach, FL 33139. Fallon Fox, Terrence Clemens and Director Michael Thomas will attend the screening. For tickets go to http://www.mglff.com/films/view/193. More info on the Game Face documentary can be found on www.gamefacedoc.com.