Minnie Minoso's gay son, Charlie, on experiencing the first Father's Day without him

In celebration of Father's Day, Charlie Rice-Minoso talks about the love he received from his legendary baseball father, Minnie Minoso, who came to accept and support his gay son.

Share All sharing options for: Minnie Minoso's gay son, Charlie, on experiencing the first Father's Day without him

Editor's Note: In celebration of Father's Day, we are sharing letters from LGBT children to their fathers, all of whom are well-known and powerful men in sports. Today we feature Charlie Rice-Minoso, the son of Chicago White Sox and Cleveland Indians great Minnie Minoso, who was the first black Cuban to play in Major League Baseball.

I imagine this first Father's Day without you will be the most difficult one of all. It's been several months since you've left and it's still so strange to think you're gone.

So many people have said how the legend will be missed; the great player, the trailblazer, the icon, the civil rights pioneer. But I hope you know that you're missed most at home because you were my dad. I miss you, but I never thought I'd say that I miss everything about you; even your quirks that I found maddening. I miss our conversations in Spanglish, arguing over sharing the bathroom in the morning, or confirming who was the last person to walk the dog. I even miss the mess you made in the kitchen after you'd spent the day making arroz con pollo.

I've been getting better since you've been gone. I only cry in bed most nights, versus every night, and I no longer fall apart every time I receive condolences on your passing. It's strange to go to the ballpark without you and see our family friends without you. When I hear your "boys club" tell a joke, my immediate instinct is to grab you so you can hear it as well. But I've been catching myself before I say those things aloud. 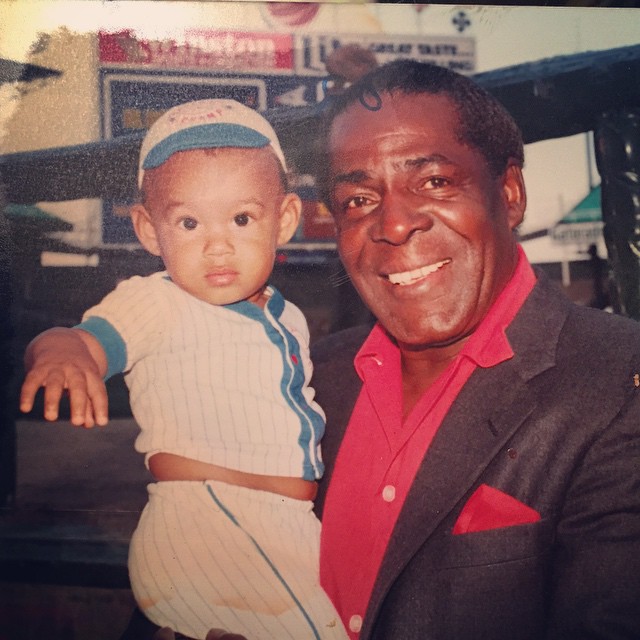 I feel like when you left us we had so little time to mourn you, to grieve and identify those key memories of you that will resonate with us the most. When you left, it was so beautiful to see how the city, country and the world embraced and honored your memory and accomplishments. People from all walks of life shared such beautiful sentiments about you. Yet it was still the worst day of my life because it truly meant that you were gone. It meant that we were being forced into this next chapter of our lives, one where you were no longer playing a starring role. Our ship's anchor was gone and we were set adrift.

The last time I fathomed a thought that included both my dad and Barack Obama was when you and your colleagues sang the President "Happy Birthday" while being honored at the White House. Who would've thought a year and a half from then he would be issuing a statement upon your death, acknowledging your "quintessentially American story," detailing how for years you inspired countless numbers of black and Latino young people across the county?

But what I might not have said enough, and I really hope you knew, was how much you inspired me. You always had the right words to say, even if it wasn't quite what I was hoping or expecting to hear.

Thank you, Daddy, for always telling me to be myself, no matter who told me I should change. Thank you for accepting all of who I am, even if it took some time for you to understand certain parts of me. I'm not perfect, as you weren't either, but somehow we made our complex and goofy relationship work.

I was cautious at your hesitation to my coming out and questioned if it was due to a lack of support or love. But when your reasons - because you didn't want your child to be treated in the same cruel and ignorant manner that you were treated when you first started playing baseball, because of the color of your skin and your Cuban heritage - I felt so lucky to have you as my father.

Peter King wrote a column earlier this month supporting his lesbian daughter's recent marriage to her wife, Kim. Now for Father's Day, Laura King thanks her father for his public and private "love and support."

"I didn't come to America and go through those things for my family to be treated the way I was treated then. That's not what America is about. I don't want that for you." It made me understand and realize the parallels that exist between the fight for Civil Rights and today's Equality Movement.

I'll never forget the time you took to always support my various endeavors, from my Little League and soccer games in primary school, to my school plays and yearbook in high school. As an adult it meant the world to me that you were supporting my "Out at the Sox" fundraisers, where we used baseball as a form of cultural diplomacy to act as a bridge of acceptance between the larger public and the LGBT community.

You helped so many people over the years and advocated for so many causes that impacted such a large number of people. Now that you're gone, I feel as though it is my responsibility to continue this work, in your honor, on behalf of causes that speak to me and that help make our community a better place. You've left me with such large shoes to fill, but I'm prepared for the undertaking. I'm up for the challenge—that's my contribution to your legacy.

Charlie Rice-Minoso lives in Chicago. You can find him on Facebook.