How this gay Olympic ski jumper did the impossible

Eric Mitchell was just a kid when he decided he had to be part of the Olympic ski jumping team. As he grew into his sport, he also realized he couldn't continue to hide the fact that he's gay. Stories from Sochi changed his fear to determination.

Share All sharing options for: How this gay Olympic ski jumper did the impossible

Eric Mitchell paced ankle-deep in the snow amidst a stand of trees, waiting alone for the results. He could barely hear the announcements as they were broadcast over loudspeakers at the Otepaa ski run in Estonia, a hundred meters away.

It was only three years earlier that Mitchell forged the personal goal that lead him here: qualify for the Canadian Olympic team in Vancouver. Skis had been strapped to his feet since he was 2 years old. When he was 8, he discovered "those crazy towers" of ski jumping and wanted nothing more than to soar from them with the birds. It was a fun diversion from life as a tween and then a teenager, scaring the hell out of his dad as he flew from higher and higher jumps.

At 14 he traveled to Whistler and saw the construction of the jumps that would, three years later, host the 2010 Winter Olympics.

Strong LGBT events at Pan Am Games in Toronto

The 519 and Pride House are teaming up with various organizations to present some powerful events during the PanAm Games to demonstrate and build inclusion of lesbian, gay, bisexual and transgender people in sports.

John Fennell talks about being gay in Russia for the Olympics and the fear that instilled in him.

"When I saw that I knew I wanted to compete in Vancouver," Mitchell said. "I just knew I had to jump off of those jumps."

The task ahead was, essentially, impossible. Barely a teenager he was a nobody in the sport, a "weekend warrior" of sorts who dabbled in this crazy endeavor. To reach the Olympic Games he would, in just three years, need to become one of the 70 best ski jumpers in the world. For any Canadian it's an uphill battle; No Canadian has ever won an Olympic medal in ski jumping. If he resided in a ski-jumping powerhouse like Norway, Finland, Austria or Japan he may have had a shot. Some teenager from Canada? No chance.

Except there he was, in Estonia three years later, needing to finish in the top 30 of the Continental Cup event to rank in the world's top-70-ranked jumpers and qualify for the Olympic Games in his home country. Mitchell was the second-youngest of the 50 competitors on the hill in Estonia that day.

It wasn't just his own Olympic dreams that rode on Mitchell's performance. To qualify for the Olympic team event, a country needs four competitors. Three Canadians had qualified for the Olympic ski jumping competition in 2010; Mitchell, in this final qualifying event, was Canada's last hope to qualify as a national team.

The trip to Estonia had already been a disaster. The airline lost Mitchell's equipment, preventing him from getting in some key pre-competition training on the jumps. No teammates were traveling with him, so his support structure was limited to his coach. It was minus-30 degrees in the dead of an Estonian winter. The pressure was building inside of him for this do-or-die event.

Traveling to the hill the morning of the competition, he was full of discouragement. While his equipment had finally arrived, his confidence was at the bottom of the hill after missing key training runs.

Despite all the setbacks, he did well for himself. He was happy with his distance; He couldn't have done much more. Still, a great day for him was an average outing for many of the European jumpers he had to beat.

With every name called over the loudspeaker, Mitchell's heart raced faster. To qualify for the Vancouver Olympics he had to finish 30th or better. A 31st-place finish meant he watched the Olympics from his living room.

With one name left to call for the finals qualifiers, Mitchell closed his eyes and bowed his head. He had escaped the coaches, athletes and media hoping to avoid the crowd if the tears flowed when his name was not called.

"When I was thinking there, I knew whatever happened I'd be fine with it because I couldn't have done more. If I was 31st, I would be OK with it. I had been training for months to be at my best, and I was at my best."

Then the voice rang through the woods.

Against every odd, he had risen from a nobody dabbling in ski jumping to Canadian Olympian in just three years. In the end, he qualified for the Olympics by 50 centimeters, half the length of a baseball bat.

In the Olympics, Mitchell surpassed expectations. In the quarterfinals, when only the top 50 jumpers qualify for the next round, Mitchell finished 49th. The semifinals were the end of the road for him, but at 17 - the youngest competitor in the Olympic ski-jumping event and one of the youngest Olympians at the Games - he was satisfied with his accomplished goal.

Over the next few years he would set his sites on Sochi. He had been fortunate simply to be at the Vancouver Olympics, given his age. Four years later he had the potential to be a contender. Yet as the weeks and months passed, something increasingly held him back from his full potential.

"I lacked so much confidence about who I was. By then I knew I was gay. I knew I was closeted. And all I could do was train harder than everyone else. But it wasn't enough. I couldn't put my whole self into the sport. I'd train at a high level, I'd beat all my teammates in training, but I'd choke in competitions. Any self-confidence was absent."

That inner fortitude was consumed on a daily basis by what he heard around him. "Fag" this and "gay" that were tossed around the facilities as casual words meant to motivate and build camaraderie amongst a straight crowd. For Mitchell, that language from coaches and other Canadian jumpers ate at him, pushing him away from the crowd.

"I was in a pretty homophobic sports system for sure. My coaches and teammates, not that they had anything against gay people, but they had gay jokes running all the time. It was such a negative thing."

For years, as Mitchell came to accept his own identity, a growing rift built inside him between his sexual orientation and his devout passion for his sport. Increasing frustration built as he yearned to date other men yet was desperately fearful that decision could jeopardize his athletic future.

"I just wished I could put so much more of myself into the sport. I always felt I couldn't put my full self into it. I could put forward an image of a great athlete, but my whole self was not there."

It was a late training run in Austria in 2013 that forever altered his athletic future. It was the end of a successful day that saw him setting some pretty solid marks and feeling great about the World Cup qualifier ahead. He took off on one last run and woke up 24 hours later in the hospital. His skis had slid out from under him, and he had suffered a severe concussion that sidelined him for several weeks critical to qualifying for the Olympics the following year.

Three months later he had recovered and won the 2013 Canadian national championship - but it was too late for Sochi. To qualify for the Olympic Games, he had missed the key competitive months of February and March. Again, if he had been with a powerhouse ski jumping program he may have made up the difference. From medal-less Canada, he was too far behind to make the list of top-70 Olympic qualifiers. 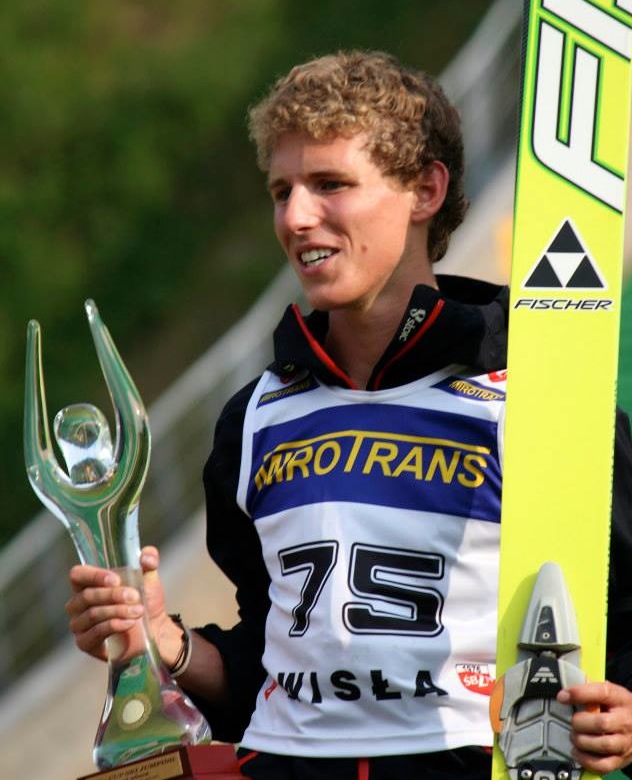 So Mitchell hung up his skis. His dream of a second Olympics gone, he focused on attending the University of Calgary and engaging in his studies that as a late teenager hadn't been part of the plan.

That's when the LGBT controversy surrounding the Sochi Olympic Games flared up. Russian lawmakers had outlawed the "promotion" of LGBT people to youth, scaring the hell out of many gay Olympians. One of those was Canadian luger John Fennell, who came out publicly as gay weeks after the 2014 Winter Oympic Games. When Mitchell connected with Fennell, his eyes were opened to the importance of his own visibility and advocacy.

"John told me how alone and terrible he felt being in a country that put a spotlight on how it wasn't OK to be gay in Russia. And I felt that was so wrong. How could that be? My Olympic experience was so positive, and I think it should be for everybody. What I heard from him sickened me. It pushed me to decide that this has to change. I want to affect this change."

Mitchell quickly came out to family and friends. When the Canadian Olympic Committee created its #OneTeam campaign in late 2014 - an effort the build inclusion of LGBT athletes in the country's Olympic movement - Mitchell was eager to join. While he had never found the strength to come out while still competing, he never wanted to hear of another Canadian athlete making the same choice.

He is now working with the Canadian Olympic Committee on an LGBT-sensitivity training program for youth that they hope to role out across the country. He has marched with the COC in both Toronto and Calgary Pride parades - something so impossible it never crossed his mind while competing just two years earlier. He's also been featured in a PSA produced by the COC to build LGBT understanding (you can watch the video below).

"I've been able to read other stories of other gay athletes, and they have been powerful to me. Visibility matters, and it's really important to be out and out there. If I were to allow another athlete to put their full selves into sport, that would mean the world to me. Athletes fighting for gold, silver and bronze are all in it together. It doesn't matter who they are. It only matters how far you can jump.

"Everybody should be empowered to live truly and compete freely."