"The barriers that kept me from getting close to them were gone and my teammates became my brothers."

Share All sharing options for: Gay athlete finds his niche and respect on college rugby team

Walking into the rec center on my first day at Ferris State University in Michigan forever changed me. Hanging up was a big rugby banner. I looked up at it, saw the players standing in a line like soldiers ready for battle and I knew that I wanted to be like them. I wanted to play rugby.

College was the first time I met people who didn't care if someone was gay or not. Everyone is so open minded and accepting of differences. I finally made the decision that I wasn't going to hide anymore. I hid my whole life because I was afraid of being judged. I didn't want that label that carried such a negative connotation. Still, my coming out process took time.

I came out to my roommate, Evan, my freshman year. He was the first guy I ever told I was gay.  He was thrilled actually and thought it was so cool that someone like me was gay. This was the first time that I felt being different wasn't so different. I went through my freshman year coming out to more and more people, which really built my confidence up. I received nothing but love and support from my friends which was something new to me, but I still felt like something was missing. I always had been an athlete and while I was in the weight room every day, it still did not satisfy my need to compete.

Starting my second year of college, I finally decided I was going to play rugby. I never played it before, nor did I know much about it except that you didn't wear protection and you had to be tough as hell to play. I knew this would be a good sport for me to try since I don't mind getting hit and I like hitting other people.

From the very first practice I knew I was going to fall in love with this game. The adrenaline rush you get from tackling another player with nothing but a mouth guard for protection is a whole new level of excitement. Knowing that you could get hurt really is what kept me coming back for more. I never felt this way when playing other sports, but maybe that's because rugby is not like other sports. 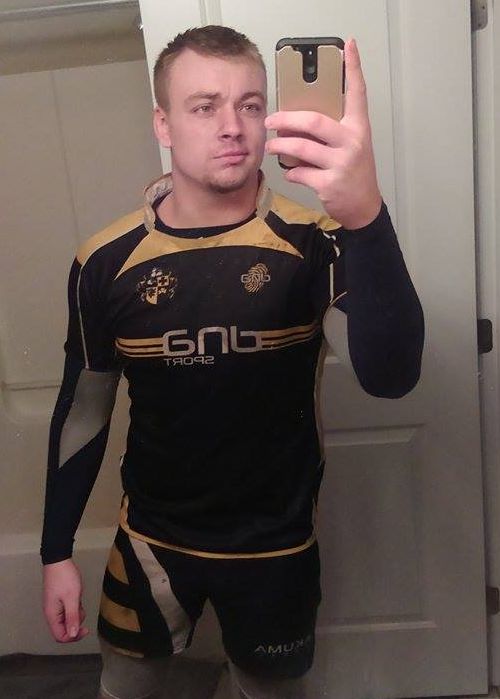 Rugby is a lifestyle. On the pitch it's hard-hitting and aggressive as hell, but yet there is this line of respect every player has for each other. When the game is done, there is a social, which is just a big party where both teams get really drunk together and not only celebrate the game that day, but celebrate rugby as a whole. These are the moments that bond a team together, but I still felt disconnected from everyone.

I spent the first half of the season not letting myself get too close with my teammates. In an ultra-masculine sport like this, I didn't think being gay would go over too well. My thought was that I didn't want my sexual orientation to be a handicap, which I'm sure too many can relate to. Being gay held me back from enjoying so much of life already and this was no exception.

I was afraid of being judged, but essentially I was judging these people too. I judged them based on the fact that I didn't think a gay guy would be accepted in a sport like this with people like this. I finally hit a point where I just did not care anymore. I wasn't going to let my sexuality dictate my freedom or quality of life anymore. Coming out to my teammates was the final piece of my coming out puzzle.

Midway through the season I had some buddies over for a typical college Friday night. After a few drinks to make it less awkward, I gathered up the courage to tell one of them. I took my buddy Johnny outside and we somehow got on the topic of gay marriage. That's when I casually slipped in that I was actually gay. He paused for a second before stumbling some words together to ask if I was serious. After realizing that I wasn't joking, he got a big smile on his face before telling me how awesome he thinks that is. It gave me a little bit more confidence to keep going.

I kept it pretty hush for a couple more weeks before I talked about it again. It was our captain this time. He gave me a big hug and let me know I had his full support. After that I knew I was going to be OK. A few weeks later at a party with all my other teammates, I walked into the room and heard a couple of guys talking about something. I approached them and one asked me "Taylor, are you really gay?"  My heart started racing, but I knew I this was my time to be honest and just completely come out. I jokingly said "If liking guys is gay, then yeah I am." A few people said they had no idea but nobody gave me any shit for it.

It was this night that I experienced complete acceptance from my fellow ruggers and total freedom to be myself. I no longer had to hide myself from anybody. I no longer had to lie to these people. Being gay is only a smaller fraction of what makes up who I am, but knowing that I didn't have to hide anymore is an overwhelming feeling. What made this experience so special was the support and respect I got from these guys. The barriers that kept me from getting close to them were gone and my teammates became my brothers. When they saw me being true to myself, they respected me for it. Being out to them strengthened my relationships with them and ultimately led to more confidence and better performance on the field.

What I love most about rugby is the sense of camaraderie and the respect you have for your fellow rugger. In rugby, it doesn't matter where you came from, what race you are, your economic status or even your sexual orientation. It takes a lot to lace up those boots and other rugby players recognize and respect that. Rugby is not for everyone which is why being a rugby player gives you that mutual connection to other ruggers. This is the one sport that has let me feel normal. It's given me this brotherhood that I never experienced before.

I can look at the bruises and scars that I get from games and be proud of them because they are so minimal to the scars I got trying to get to this point. I earned my spot on this team. I was equal to them. Being gay no longer mattered. I'm not just the token gay kid trying to play rugby, I'm just a normal kid playing rugby.

Rugby changed my life because it taught me a few things. It has taught me that there is nothing that should ever hold you back from going out and trying new things and experiencing life. Being different is not a reason to miss out on other opportunities. Stereotypes are bullshit and only hold you back from pursuing what you really want in life.

Taylor Vanderlaan is a student at Ferris State University in Michigan and a member of the men's rugby team. He can be reached on Facebook or via email (vandet22@ferris.edu).