After coming out as gay, Rob Redding has found nothing but support from the football team and athletic department at Div. II Henderson State University.

Four years ago I decided I was finally tired of hiding that I am gay.

As an Athletic Trainer at Henderson State Univ., an NCAA Division II school in Arkansas - in a town of 10,000 called Arkadelphia - there were so many reasons to leave things be, just live my life in the closet. The job was great, the personal relationships and friendships were top-notch. Why change it all up? Why risk it?

The "why" was my own personal mental well-being. I just couldn't go on living a secret life. And the person I most needed to tell was our head football coach, Scott Maxfield.

As I read story after story on Outsports - something I have done since finding the site in 2001 - I saw that by being honest and being who you are really was a better way.

So, on a daily walk with our head football coach, I did it.

I remember it taking a lap or two around the track to work myself up to it. After I blurted out the words, Scott had a question.

"Why didn't you tell me sooner?"

He worried that I didn't trust him enough. At this point we had been friends for about 10 years, having worked together most of those years including working together at our previous school. The truth is, I was scared to tell him because of the possibility of things changing. 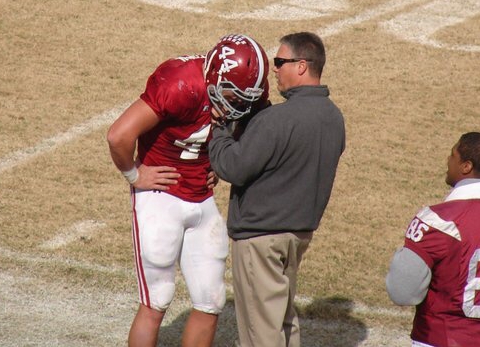 Athletic trainers are medical professionals who work very closely with student-athletes. In my case I am the Assistant AD for Sports Medicine. My primary sport coverage responsibilities are football and baseball. I am at every practice and travel to every game with my teams. I am responsible for evaluating and treating injuries to my student-athletes. A lot of time this requires close physical interaction with them. While I am very professional with all my interactions, I have long worried about how the athlete would feel if the guy doing a deep-tissue massage on his hamstring was gay.

Athletics can be a daunting and sometimes unfriendly environment for gay people. Being in the South and the Bible Belt adds to this as well. I examined all of these things as I worked my way to this much-needed talk with the coach.

Aside from him being disappointed that I had waited so long to tell him, the rest of my coming-out conversation with him was great. I came out to his wife that evening and received much the same response. They are great people and some of my best friends.

As so many others have expressed, far from my fears being founded I discovered my relationship strengthened by this sharing of my personal truth.

The 2015 football season was the first time I shared being gay with some of my current players. I am reasonably sure that most of my athletes have known I am gay. While I don't talk about much personal stuff at work I do not go out of my way to hide everything. It's definitely there if you look. I began spending some time with two of my football players outside of work. Mostly I felt the need to tell them to assure them that our friendship was just that, and that there were no secrets on my end.

Again the sharing of this deeply personal side of me showed them my trust and strengthened our relationships.

This past June I was fortunate enough to attend the 2016 Outsports Reunion in Chicago. The event was outstanding and gave us the opportunity to share and listen to stories from other gay student athletes, coaches, administrators, sports media folks and, yes, athletic trainers. I heard over and over again about how positive coming out was. I saw over and over the power of sharing our stories with each other.

On that Saturday in Chicago I listened to former Major League Soccer player Matt Hatzke talk about not seeing any well-adjusted successful gay men out there when he was growing up and playing soccer. There are lots of these gay men out there. There just are not enough stories out there to be seen.

College football player knew he was gay all along

Nathan Fort has struggled with being gay for much of his life. The college basketball player from rural Arkansas opens up about his belief in God and Jesus Christ getting him through some very tough times.

That tremendous experience in Chicago is what has brought me here writing this story to share. As the guys at Outsports often say, "Another domino falls."

Before I could write the story, though, I had to clear it with our athletic director, Shawn Jones. I can say I have the best boss in the world. Our conversation was long and reaching, with him giving me nothing but support. He is a reflection of our university administration: I am so fortunate to work at a place where there is so much acceptance and support.

So I am sharing this story for everyone out there to see a successful out gay man working in college athletics in the South. The small-town South. In football.

I know there are challenges that folks are dealing with every day, and some are in difficult environments. But I want them to know they have a community they can turn to for support and encouragement. I want them to see that it's OK to be who they are wherever they are and whatever they are doing.

You can find Rob Redding on Facebook. You can also email Rob at reddingrob@yahoo.com.