The NFL is having many teams wear a "throwback" jersey, a historic uniform from the team's past. Some are done well and some want to make you gag. 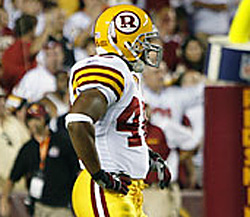 The Washington Redskins looked good Sunday in uniforms they wore into the 1970s. I was watching the Sunday night Bears-Cowboys game at former player Dave Kopay's house and on his mantle is the same helmet with the distinctive "R," a memento from his days with the 'Skins. 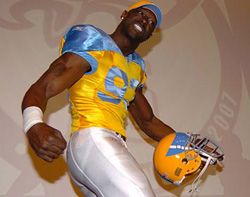 These Eagles jerseys, worn Sunday, were allegedly inspired by the Swedish flag and debuted in 1993. What Sweden has to do with the NFL is beyond me, but apparently a lot of Swedes helped settle the area. They certainly know nothing about uniform design, but I do like Ikea. The Detroit Free-Press headline Sunday asked: "Why are the Lions playing Team Sweden?" The Swedes kicked the Lions up and down the field, 56-21. -- Jim Buzinski

For more on Sunday's action, check out our Week 3 notes.