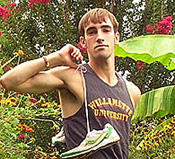 Steven Millard is a cross-country runner at Willamette College in Oregon and among the new breed of gay jocks who are out and not afraid to tell their stories. Cyd did a terrific Q&A with the 21-year-old, who talks about reconciling his sexuality with his Christianity.

Based on who has come out, it is easier for a male in a "minor" sport at a smaller school to go public. We're still waiting for an out jock from a major school or team sport. But even here some progress is being made. Witness the closeted collegiate wrestler whose posts on our Discussion Board are becoming must-reads. Here is from something he wrote this weekend:

Oh and one other funny thing from tonight, a friend from back home called and said that the next time I'm home that we have to go to a bar, since the last time we hung out we were like 19, because he joined the army. Anyway, he said that we gotta pick up some chicks, and a few minutes later he added that he forgot, and we'd maybe find me a guy. This was surprising since I didn't really think he was that accepting of homosexuality, I thought that since we were friends and I'm not overtly gay, he just put up with the fact.

Millard and the wrestler are at the vanguard of what I hope becomes an ever-growing movement. --Jim Buzinski