Share All sharing options for: Weir loses a heartbreaker 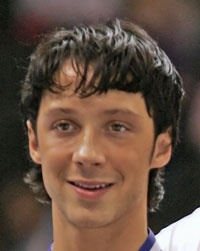 Johnny Weir and Evan Lysacek had a finish at the United State Figure Skating Championships in St. Paul, Minn., that was unbelievably close.

Defending champion Evan Lysacek and former three-time champion Johnny Weir did the near impossible: they finished the competition with exactly 244.77 points each. The tie was broken and the championship awarded to Lysacek because he outscored Weir in the long program 162.72 to 161.37.

The two skaters are a study in contrasts as evidenced by their routines:

The script featured two men whose similarity started and ended with their results Sunday. The Chicago-born Lysacek is known for his traditional pant-and-shirt costumes and the edgy, heart-pounding drama in his skating. Weir, on the other hand, is known for his extravagance and eccentricity -- today's costume plunged off one shoulder, had a low back and, in Weir's words, was a "sparkly onesie." He is more elegant and lyrical than Lysacek, but often reluctant to pull out his quadruple jump.

Not that the two of them are friends: “I respect Evan as an athlete, but as a person I don’t really like him,” Weir told NBC. “There’s nothing special about him to me. We would never be friends, and I wouldn’t even know who he was if we weren’t competing against each other.” When asked about Weir’s comments after his victory, Lysacek said: “Oh that’s nice. Thank you for sharing that with me.”

But Weir has always been one of my favorites after the sly way he pushed his sexuality at the 2006 Olympics without ever saying whether of not he is gay. And he was back at it in a recent interview.

"Not everyone can relate to me," he said, when asked if he felt he could help improve the sport's sagging TV ratings. "My personality is a little bit harsh for some people. So I'm definitely not going to be that person that can get the little girls plus their mothers plus their fathers plus their gay brothers to watch skating."

Amy Strauss has a terrific profile of Weir in Philadelphia Magazine that does the best job of summing up his look:

Looking pretty comes naturally to Johnny Weir. He’s a fetching hybrid of the feminine and masculine, an androgynous gossamer who attracts women and gay men equally. He’s lean and sinewy at five-foot-nine, and his most striking feature is his pouty bottom lip, the kind you want to bite, that anchors a top shelf of perfectly aligned, ice-white teeth. A brush of eyelashes frame kind, wide green eyes set off by a straight, serious set of eyebrows and a square jawline. He’s beautiful.

Johnny Weir remains one of my favorites athletes because he is who he is, without apology. I hope next year he wins nationals and gets a medal in the 2010 Olympics. –Jim Buzinski