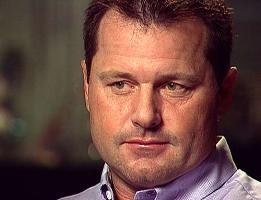 Watching Roger Clemens on 60 Minutes made me even more convinced that the guy did something shady. Mike Wallace did a great job of grilling Clemens, and the Cy Young winner looked like he was sweating bullets throughout, drinking from his water bottle over and over and at times avoiding Wallace's eye contact or fidgeting in his seat. But it was these exchanges that sounded very questionable:

Wallace: What penalty should there be for someone who is taking these performance-enhancing drugs?

Clemens: I think it's a self-inflicted penalty. They break down quick. It's a quick fix.

Who doesn't think there should be a penalty for taking performance-enhancing drugs? If he truly hadn't taken them, it seems to me an answer other than, "they're punishing themselves enough" would be in order.

And then there was this gem:

Wallace: How about a lie-detector test?

Wallace: So as far as you're concerned, you would conceivably ...

Clemens: Yeah, I don't know if they're good or bad.

Wallace: If you passed a lie-detector test, wouldn't that help prove that you're telling the truth, and help restore ...

Clemens: I don't know, either.

I know anything that I'm innocent of, I'd be happy to take a lie-detector test; anything I'm guilty of, I'm, well, uh, I question the validity of the tests themselves. It certainly helped Travis Henry.

Clemens will be appearing in front of a Congress near you very soon. -Cyd Zeigler jr.