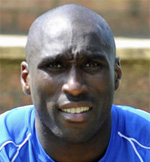 English soccer player Sol Campbell is under nasty verbal attack by fans of his former team who are hurling racial and homophobic slurs at him.

The former [Tottenham] Spurs captain faced a barrage of abuse from Tottenham fans during a match with Portsmouth on Sunday.

A large bunch of terrace thugs sang: "Sol, Sol, wherever you may be, You're on the verge of lunacy, And we don't give a f*** if you're hanging from a tree, You Judas c*** with HIV."

The 34-year-old has been taunted over claims he is gay since he left the north London club for Arsenal - despite having a string of girlfriends. He has always denied he is gay and said the rumors were started by Spurs fans angry that he quit for their rivals in 2001.

The abuse on Sunday has prompted a flurry of reaction in England, where fan abuse at soccer matches has been a subject for years. A group representing gay soccer fans in England said, "Such treatment of footballers is completely unacceptable and is one of the main reasons why there are no out gay professional footballers."

Police now say they will investigate the racial and homophobic abuse after initially saying there were too many fans chanting the slurs to single anyone out for possible arrest.

Campbell has been berated by rival fans for being gay for years, ever since he left the Spurs. In 2005, his older brother got 12 months in prison for beating the crap out of someone who said Sol Campbell was gay.