Pitcher Barry Zito has been mediocre since coming to the San Francisco Giants two years ago via free agency (a 21-30 record with an ERA of around 5), but he can supplement his $126 million contract with a new gig as a jeans model.

According to clothing company True Religion, the city needs a huge billboard with their new model. Soon, we will see the pitcher grace a billboard on Bush Street and Van Ness Avenue.

A True Religion exec found Zito while reading a California tourism magazine and seeing him posing with a guitar; he said Zito had "the look." Of course, the exec thought Zito was a musician, which is what Giants fans must have thought the past two years. I do agree he does have "the look."

"What's great is that they don't want my name,'' Zito said. "I'm just strictly a model. Who knows? Maybe it'll open up other doors. It's always fun to be involved in different things.'' 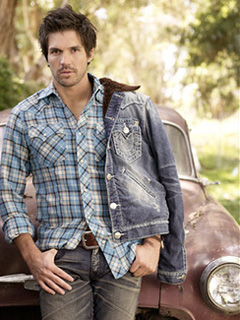