A racist column about Plax?

Share All sharing options for: A racist column about Plax? 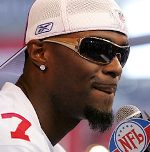 Al Sharpton has made his way back into headlines with an attack on a New York Post column about Giants WR Plaxico Burress, calling the column racist. In his Monday column, Post writer Steve Serby started his rant about Burress with:

Good for Tom Coughlin. Good for Coughlin for tightening the noose around Plaxico Burress.

Sharpton says that the use of the term "noose" is a direct reference to the lynching of blacks. He is demanding that the Post apologize and investigate the column "or else." Burress was held out of the first quarter of Sunday's game by Coughlin.

I'm curious to hear what others think about this. I was trying to think of a gay-related analogy, but "Good for Tom Coughlin for stitching a pink triangle on the jersey of Jeremy Shockey" doesn't quite equate.