Share All sharing options for: Mud Bowl a hit at Michigan homecoming 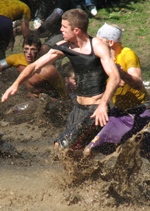 Autumn came to the University of Michigan this weekend, and so did I. My partner's 10th dental school reunion drew us back for homecoming. Ann Arbor is a lovely little town, especially with the light cool breeze that October brings. While we didn't make it into the stadium for the 45-20 clobbering of Michigan at the hands of Illinois, we did spend a good hour at the SAE (Sigma Alpha Epsilon) house with a couple thousand other people there to watch the annual fraternity Mud Bowl. I took plenty of pictures.

For 70 years, SAE has hosted a homecoming weekend football game in the "field" at their house, which hoses of water turn into a muddy drenched swamp for a battle with another fraternity. This year their opponent was Phi Kappa Psi (in black). SAE won the game going away, 36-16.

The game is wonderfully entertaining. The guys on the field, er, swamp give it their all. There's tackling, slamming, running; It isn't pretty, and there are precious few great plays, but the crowd gets into it almost as much as the players. Most every rule seemed to be suspended. A ball in the air headed toward a receiver? Just tackle him. Wanna confuse the defense? Just have everyone moving at the snap. It was more like rugby with a passing game, or wrestling with some pigskin. Either way, it reminded me of football in the rain in college and I loved it.

A fun little twist: At halftime, two sororities (this year it was Tri Delts and Alpha Phi) come out in all-black skin-tight uniforms and play a quick 20-minute game. The best play of the day actually came from the sorority game, with a Tri Delt intercepting Alpha Phi on a pass that hit the back of the receiver.