I am thrilled that rugby player Ben Cohen is incredibly gay-friendly and held a celebration last year for his gay fans. I also think it's appropriate that he did not win the sports award from the London Stonewall gay rights group.

The sports award instead went to the Stonewall Lions Football Club, an English gay soccer club that won this year's Gay World Cup in London. The Stonewall club was cited for being "a beacon of light in the darkness of homophobia that exists in football."

Homophobia in soccer has gotten a lot of attention in Britain after incidents where players were taunted with anti-gay slurs. The BBC's Bob Ballard told Outsports that he hosted an event last month at the English Football Assn. to deal with the issue. English player Sol Campbell recently talked about the need to eliminate homophobia from the sport.

Cohen was the only non-gay nominee that also included BBC presenter Claire Balding and Australia's gold medal Olympic diver Matthew Mitcham. It was good that the award went to a gay team and not simply a straight ally, no matter how supportive. The Lions, by demonstrating excellence on the field, show with their play that gays belong on the athletic field. 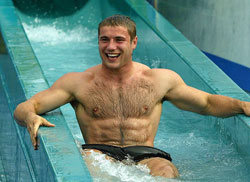 Cohen (right) has been terrifically open about appreciating his gay fan base, and in an interview last year with Outsports said that he thinks elite-level rugby is ready for an openly gay player. Such a player would be lucky to have Cohen as a teammate. Cohen is also not shy about letting gay guys see him in various stages of undress.

In terms of impact on the larger world, though, Mitcham's gold medal was the story of the year. An openly gay Olympian was rare in 2008, let alone one who won a stunning gold medal. I guess, though, it was tough for an English group to give its top sports honor to an Australian.