Ricky Williams in touch with his 'feminine side'

Share All sharing options for: Ricky Williams in touch with his 'feminine side' 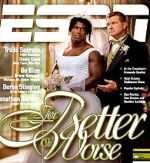 I have always been a big fan of running back Ricky Williams (now with the Miami Dolphins) for years since he thanked all his fans "straight or gay" during an interview. He posed for a famous ESPN the Magazine cover when he was drafted by coach Mike Ditka of the New Orleans Saints wearing a wedding dress.

In the upcoming issue of Playboy, Williams said wearing the dress was his idea and goes back to being a ninth-grader.

"In 9th grade, I dressed as a cheerleader on Halloween. It was my idea to wear the wedding dress. I didn't think it would offend anyone. I just wanted to show my relationship with Ditka. I was looking at myself, not as a football player, but as an open, interesting person. The reaction from reporters and fans was shocking. I didn't see why it was such a big deal for a football player not to be afraid to be in touch with that side of himself. It doesn't make sense that a football player is supposed to be fearless but should be afraid to be in touch with his feminine side."

How cool is that? An active NFL player discussing his feminine side. After his absence from the NFL for pot smoking, Williams has been reborn on a Dolphins team that is 5-4. He is averaging 4.4 yards a carry and has three touchdowns, including a 51-yarder last week. Here's hoping he keeps on scoring and stays in touch with his feminine side.