Gay player recruited by the ABA

Share All sharing options for: Gay player recruited by the ABA 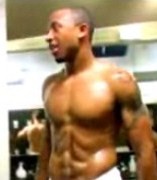 Outsports has learned from various sources that openly gay Mike Survillion, the narrator and one of the stars of Logo’s gay-basketball series Shirts & Skins, has received an offer from the ABA’s San Francisco Rumble. Survillion’s amateur Rock Dogs team played a game against the Rumble earlier this year, losing 51-41.

Survillion talks at length during the show about his hope of playing professional basketball. In particular, Survillion talks to former NBA player John Amaechi about that hope. Amaechi acknowledges the young guard’s skills but told him he had to learn how to become a team leader on and off the court.

This has long been the way experts have believed one of the four major sports leagues would have its first openly gay active player: An out player would simply be too good to pass up either in a draft or as a free agent.

This makes Survillion the second openly gay male professional basketball player in the U.S. Survillion’s Rock Dogs teammate, DeMarco Majors, played with the ABA’s Hawaii team even while he was training for the Gay Games (where he won gold). Amaechi was out to friends while he played in the NBA, but he was not out to the public in general or the press.