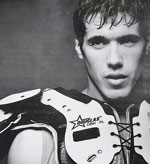 Brady Quinn, who got my vote as the 2007 hottest player in the NFL despite throwing only eight passes, will get his first start Thursday night at home against the Denver Broncos.

Quinn replaces an inconsistent Derek Anderson, who has become the fall guy in the Browns' disappointing 3-5 start. I have been calling for Quinn to start since early in the season after watching Anderson underperform with an offense loaded with talent.

Despite no direct evidence that Quinn his gay, he has become a gay punchline on many mainstream sports blogs, including Deadspin, one of the most popular.

Wrote Deadspin of the Quinn announcement.

Thursday night's game just became so much more compelling and watchable. I wonder if the NFL forced the Browns to make this move so the the NFL network could infiltrate some of the "Grey's Anatomy" audience?

Why the "Quinn As Gay" theme?

Whatever, all Browns fans care about is whether Quinn can move the offense and get Cleveland started on a playoff run.