Share All sharing options for: Go see 'The Wrestler' 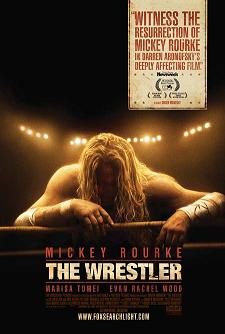 Before any of the hype, I saw a trailer before a movie for a little upcoming film called simply "The Wrestler." As I saw the trailer a couple more times and heard the early reviews, my expectations rose considerably. I finally got to see the film tonight, and it did what few films have done for me: It exceeded my expectations.

As you've no doubt heard, Mickey Rourke is the movie. His portrayal of an over-the-hill wrestler struggling to find his own meaning in life is one of the great performances of our time. So often the tears rolling down the cheeks of the characters we watch on the big screen are contrived; You can see the words on the script: "Main character cries." Rourke's laughter and his tears are organic; His character's pain, be it physical from the pounding in the ring or emotional from the pounding of his one-fast-paced life, is brilliantly vivid yet not overplayed.

There isn't much to the story; The previews tell most of it. A wrestler tries to make a comeback and struggles with relationships with his daughter and the object of his affection (a stripper brilliantly played by Marisa Tomei). It's the twists and turns along the way, sometimes very subtle, that move you. Most of the film is uncomfortable to watch, as this hulk of a man is broken down by the women in his life and the body he tries desperately to keep young. But it is deeply satisfying. Loss is a theme every person can understand; We all experience it throughout our lives. Whether it's our favorite team losing, or losing a job, or losing a friend, or losing a lover, every person understands loss. Few stories I have seen get to the core of loss better than "The Wrestler."

I've heard some gay people pooh-pooh the movie because they desperately want Sean Penn to win every Best Actor award for his portrayal of Harvey Milk. I've seen both movies: Both performances are good, but Rourke's performance body slams Penn's from the top rope.

By the way, I also love Bruce Springsteen's theme song for the movie. Hauntingly perfect. In case you haven't seen it, you can see the trailer here: