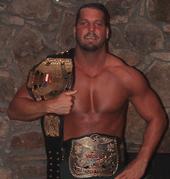 Openly gay former pro wrestler Chris Kanyon (right) has become well-known after his career for 1) being gay and 2) for not pulling punches when it comes to talkin about pro wrestling. The latest in Kanyon's sites: Brock Lesnar, who a couple weeks ago won a big fight on UFC. On Myspace, Kanyon rips into Lesnar, questioning his integrity and saying that Lesnar's success comes from his luck and preferential treatment, not his skill.

And the biggest question of all remains unanswered. How does Lesnar continue to be so damn lucky? His public statements vary from offensive to ridiculous to covered-up by reporters to protect him from his own stupidity. And an intelligent businessman like Dana White still supports and promotes him.

White is the president of UFC.

Kanyon also rips the WWE and UFC for giving Lesnar too many opportunities:

With no respect for Wrestlers or Wresting, Lesnar was promoted quickly and at the cost of many fan favorites and Legends. He was immediately given big wins over Jeff and Matt Hardy, destroying them along the way. He was then given wins over Rob Van Damn, Hulk Hogan, The Rock, The Undertaker (in one of his trademark matches: Hell in the Cell), was made King of the Ring, won the Royal Rumble, was given the WWE Championship 3 times and was put in a WrestleMania main event. And how does Lesnar thank the WWE, Vince McMahon, and all the wrestlers that let him beat them to help him get over? He quits.

And what's worse, after a failed attempt to get into the NFL (where it takes actual talent to succeed as opposed to guys like Vince McMahon and Dana White fawning over you), he enters the UFC, direct competition to the WWE for their Pay Per View dollars. Will Vince ever learn?