Share All sharing options for: 148 days to Beijing: top athletes pulling out 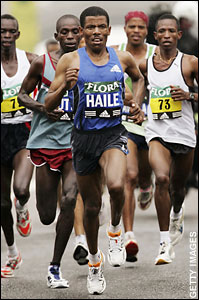 If the Olympics are exciting because they feature the world's best athletes competing on the world's biggest stage, Beijing organizers took a few hits this week.

Haile Gebrselassie, the fastest man ever to run a marathon (2 hrs, 4 min, 26 sec), said on Monday he will skip the Olympics, afraid that exposing his distance-running lungs to Beijing's air pollution could cause permanent damage. The women's marathon world record holder, Paula Radcliffe, is planning to compete in Beijing but has reportedly been working with pollution experts to adjust her asthma medication. Radcliffe is seeking redemption after dropping out of the 2004 Olympic marathon in Athens.

The tennis field is also thinning out. Belgian Justine Henin, who won tennis gold in 2004, has said asthma forced her to pull out of the China Open in September and that she might forgo the Olympics. Meanwhile, Andy Roddick isn't waiting to make his decision. He said Wednesday that instead of traveling to Beijing he will remain stateside in August, opting to defend his title at the hard-court Legg Mason Tennis Classic (Aug. 11-17) in preparation for the U.S. Open.

In other Olympic news, hundreds of Tibetan monks began a six-month march from India to Tibet, in protest of the Beijing Olympics. Assuming they aren't arrested first, the monks' march is timed to end during the Olympics, which begin August 8.

This came a day before the AP reported that the Chinese government has been cracking down on citizens rushing to file human rights complaints ahead of the Olympics. Officials reportedly have taken measures that include "assault, harassment of family members and kidnapping, and incarceration in secret detention centers."