No more butt-slapping for Favre

Share All sharing options for: No more butt-slapping for Favre 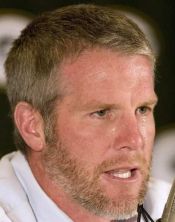 Green Bay Packers quarterback Brett Favre, in his retirement press conference, talked about some of the things he is going to miss:

Football, I think is very unique in that of all the sports because you have to rely on one another so much more than the other sports and it's a physical sport, which I think in turn mentally challenges you more so than any other sport. And I am a little biased, but I will miss that. Sitting in those meetings with the receivers and figuring out how we're going to beat the upcoming team and challenging each other and doing it in a fun way, slapping our big linemen on the butt, which I don't think I'll be doing that anytime soon. But all that stuff, man that's just what it's all about. And I will miss that stuff.

Listening to Favre reminded me of this amusing segment in 2002 on HBO that I wrote about:

There was a very funny bit on HBO's "Inside the NFL" when Green Bay quarterback Brett Favre and center Frank Winters talked about their 11-year "relationship" of QB to center.

In a spoof with comedienne Wanda Sykes featuring a therapist analyzing what makes them click, Favre talks about Winter's tight ass that now droops; the therapist speculates about how Frank gets jealous if Brett has another center and "touches another guy's balls." In the closing credits Brett talks about the two of them "spooning together."

It was all tongue-in-cheek but I thought it was cool these two guys were comfortable enough to go along with the gag. --Jim Buzinski