Is NFL a bad 'Dancing' partner?

Share All sharing options for: Is NFL a bad 'Dancing' partner? 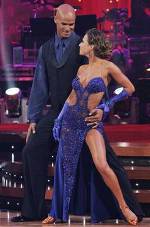 Miami Dolphins star defensive end Jason Taylor is tearing up the dance for this season on ABC's Dancing with the Stars. But the NFL hasn't exactly embraced their star's stellar appearance on the show, says Yahoo Sports columnist Michael Silver. He offers several reasons this might be, one of which harkens back to a particular Red Sox post-World Series appearance a couple years back:

The NFL isn’t in touch with its feminine side: Most football people believe a locker-room leader like Taylor should have been sweating it out with his teammates in March, and the sight of him wearing a pink tutu (in the season premiere) was too much for them to process. It isn’t like Taylor’s appearing on “Queer Eye For The Straight Guy,” but to many NFL types, it’s the same thing.

No doubt many in the NFL have issues with their feminine side. But it isn't the first time an NFL star has donned a tutu. NFL great Emmitt Smith won the competition a couple seasons ago; and I don't remember complaints that the NFL was avoiding it. -Cyd Zeigler jr.