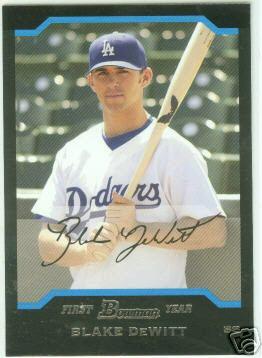 My new favorite hottie is Los Angeles Dodgers third baseman Blake Dewitt. The Dodgers who have been ravaged by injuries have been forced to call him up from Triple A ball not once but twice this season and he hasn't done too shabby, hitting .254, with 9 runs on 15 hits and 7 RBI's.

Kevin Youkilis, first basemen for the Boston Red Sox set a Major League record by handling his 1701 consecutive chance without an error.

Ian Kinsler of the Texas Rangers has been on base in all 25 games this season, giving him the longest streak in the Majors so far.

Brian Giles hit a solo home run in the fourth inning of the San Diego Padres win over the Arizona Diamondbacks on April 4th. No big deal except that it had been 9 home games and 93 innings since the team had hit a home run. Hitting is not their strong suit these days.

The Colorado Rockies starting pitching is not looking like the stellar game stealer's of the last part of last year. Aaron Cook is the one bright spot at 3-1 with a 2.91 ERA, but then you have Jeff Francis, their "ace", who is o-2 with a 5.01 ERA, Franklin Morales is 1-1 with a 6.00 ERA, Ubaldo Jiminez at 1-2 with a 6.46ERA and finally who is 2-2 with a 7.43 after surrendering 10 runs in the first inning to the Los Angles Dodgers on April 26th.

Congratulations to the Los Angeles Angels of Anaheim's Vladimir Guerrero who hit his 2,000th career hit in a bittersweet loss to the Detroit Tigers.

Atlanta Braves Coach Bobby Cox continues to be a cantankerous old coot. He got ejected from his 136th game as a Major League coach, extending his already existing record.

And the hits just keep on coming...Brenton Metzler