Ronaldo has it out with transvestites

Share All sharing options for: Ronaldo has it out with transvestites 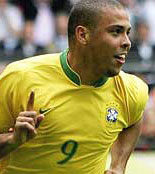 Brazilian soccer superstar Ronaldo, who plays for AC Milan in Italy, was involved in an altercation in Rio de Janeiro after discovering that three prostitutes he picked up were transvestites.

Police said that the incident began when Ronaldo discovered he was dealing with transvestites instead of women and was reportedly infuriated. Carlos Augusto Nogueira, a police inspector, said that Ronaldo admitted he knew they were prostitutes when they met but did not realize they were transvestites until they reached the motel.

“He admitted to everything, he wanted to have fun,” Nogueira said. “But he committed no crime at all, it was immoral at best.” Prostitution is not illegal in Brazil. “Ronaldo said he is not good in the head and that he is going through psychological problems because of his recent [knee] surgery,” Nogueira added.

Ronaldo, in an account verified by one of the prostitutes, said another of the trio tried to shake him down for $30,000 to avoid calling the media or the police; he had offered each of them $500 for showing up. Brazilian police said they believed his version of events. Ronaldo, who is divorced, denied he used any drugs with the prostitutes.

"It is necessary to clarify that no formal accusations were made against Ronaldo," read a statement on the player's Web site. "An advocate of social causes, Ronaldo has never used drugs and has always been admired by children in Brazil and around the world. There are indications of an extortion attempt in which the Milan striker is the only victim."

I smell a sequel to "The Crying Game." --Jim Buzinski

FYI: For those wondering, this Ronaldo (who uses one name) is not the same as King of the Hardwood contestant Cristiano Ronaldo. The Brazilian Ronaldo appeared in a 2006 "Simpsons" episode.

Thanks to Finneye for the story tip.