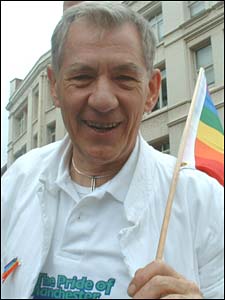 At a speech Thursday for Stonewall's annual Equity Dinner in London, Sir Ian McKellen ended his keynote remarks with an interesting question: "Where are the sports people who will brave the ragging in the changing rooms and the heckling from the terraces?" Coming from him, this is more than a fair question. McKellen is openly gay. He participates in pride parades and co-founded the Stonewall organization. He has been a role model and positive influence on millions, including former NBA player John Amaechi. And McKellen is openly gay in Hollywood, where big bucks are at stake and where there are about as many openly gay stars as in professional sports.

The truth is that, in the context of the gay rights movement, gay athletes are underperforming. We are not pulling our weight. In the area of supposed tough guys, gay athletes are represented mostly by invisible cowards. McKellen's generation made tremendous progress in the face of ugly, deep-rooted resistance. Because of them, gays today, at least in the Western world, will never have to face that level of discrimination again. I hope my generation--which includes gay athletes competing in college and professional sports right now--will ultimately show the courage to continue the legacy set forth by previous frontrunners (a term I use as an intentional nod to the contributions of a fellow Outsports blogger whose book two decades ago was courageously ahead of its time).

As McKellen stated in his speech, just before calling out closeted athletes, "None of us can do anything more important for ourselves and then for our friends and our family and the community at large than to come out of the closet completely." McKellen is right. In the age of Outsports, more gay athletes should be out. --Ryan Quinn