An Argentine gay website has the scoop of the Olympics - American swimmers Michael Phelps and Ryan Lochte are gay! Or maybe not. (See the web page after the jump). 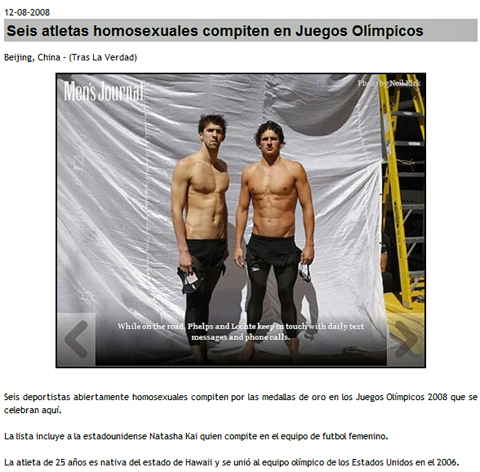 The site, Sentidog.com, has an article about the openly gay athletes at the Beijing Games. The headline says: "Six homosexual athletes compete in Olympic Games." Beneath the headline is a photo lifted from Men's Journal of Phelps and Lochte.

Are Phelps and Lochte gay? Not that I know of, and the article never mentions them. I guess the web designer figured he'd pull a shot of two hot shirtless swimmers to grab page views ( he probably had it as his screensaver). I'm surprised he didn't grab one of Brady Quinn.