Share All sharing options for: U.S. disappoints in shot put 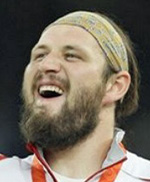 Tomasz Majewski of Poland (photo) picked the right time for a career-best toss of 70 feet, 6 1/2 inches to win the gold. American Christian Cantwell was second and Andrei Mikhnevich of Belarus collected bronze.

Reese Hoffa, the reigning world champion, underachieved and finished seventh, but that was better than two-time silver medalist Adam Nelson, who did not register a toss, instead fouling three times.

The bummer for American audiences is that virtually all the track and field events will be on tape since they start at night in China. NBC could not get the finals moved to the morning Chinese time (prime time in the U.S.) like it did for swimming and gymnastics; the latter sports are indoor and not subject to the heat and smog the track and field athletes would face during the day.

Of course, NBC could show the events live (the shot put started at 9 a.m. EDT), but it chooses not to. It's one of the times I wish I lived near the Canadian border to pick up the CBC's live coverage. Watching a sport live -- what a concept!