Share All sharing options for: Matthew Mitcham's partner stands by his man 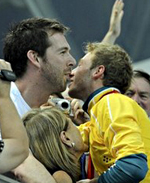 When Matthew Mitcham greeted the media after winning his 10-meter platform diving gold, he raced over to hug reporter Jessica Halloran of the Sydney Morning Herald, who wrote Mitcham's coming out story with great sensitivity back in May. Halloran followed up today with the only article I could find that discusses Mitcham's relationship with his partner, Lachlan Flecther.

He kissed him briefly in the stands and gave him his Olympic bouquet. Later, outside the glowing blue Water Cube, Matthew Mitcham and his partner, Lachlan Fletcher, firmly embraced, both shedding tears. ...

Carefully nursing Mitcham's Olympic bouquet, Fletcher spoke of the incredible journey that the diver had taken to the top. Fletcher has been the one constant over the past two years.

He was his rock when Mitcham retired in his late teenage years suffering anxiety and depression. He watched him become a stunt diver at the Sydney Royal Easter show, supported his fight back into the sport and now to win Olympic gold.

"It's been so up and down," Fletcher said. "When I first met him, he was pretty unhappy, he wasn't liking the diving in Brisbane at all, he didn't want to do it, wasn't happy being there"

The story chronicles how Mitcham, despite being proudly gay, was nonetheless worried about whether his sexual orientation would overshadow his diving.

"The biggest thing he was worried about was people paying more attention to that than his actually diving," Fletcher said. "And I suppose that kind of did happen a little bit. Hopefully, now it won't be so much of an issue any more."

Mitcham's orientation will still be of interest simply because out athletes are still relatively rare. For all time, though, the record books will not focus on that, but simply state: "GOLD --MATTHEW MITCHAM, AUSTRALIA."