Bryan Clay muscles his way onto a Wheaties box

Share All sharing options for: Bryan Clay muscles his way onto a Wheaties box

There's nothing quite like getting your day started munching on some Wheaties and staring at the orange box featuring decathlete Bryan Clay, who's ripples and bulges tranfixed many a gay Olympic fan this month. Starting in September, you'll get just that chance.

General Mills, maker of the crispy flakes, announced that Clay and gymnast Nastia Liukin will get their own special edition Wheaties boxes. Liukin won five gold medals in Beijing and helped the U.S. win silver in the competition. Clay was the first American to win the decathlon since Dan O'Brien did so in 1996. Michael Phelps, by the way, is heading to General Mills rival Kellogg. Check out the box covers after the jump. –Matt Hennie 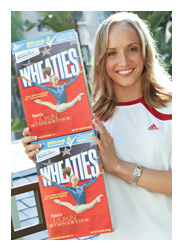 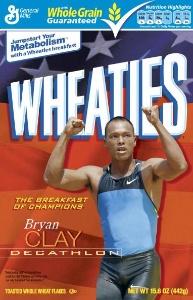