BFPN: The worldwide cheerleader for Favre

Share All sharing options for: BFPN: The worldwide cheerleader for Favre 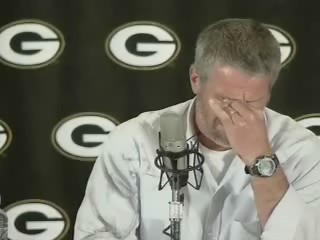 If you’ve been watching ESPN over the last two days, you may be surprised to know that the Olympics have not been postponed because of Brett Favre’s return to Green Bay. Major League Baseball is continuing to play games. And tennis and golf tournaments have not been canceled. You might not know all of this, because ESPN has become the Brett Favre network, with constant reports from Green Bay, interviews about Favre with guys from Terry Bradshaw to Steve Young, conversations with people who have talked to Favre and fans who paint themselves in green and yellow with “4” on their chest; I’m waiting for the hourly reports of what Favre has eaten and when he uses the bathroom.

Of course, Favre is loving all of it. He doesn't really want to play; this was all about his need for attention, and he just hasn't been getting enough sitting at home in Mississippi. Now he is, and he's happy as a drag queen at Mardi Gras.

One thing that keeps bugging me is the mantra that all of ESPN's experts follow: The Packers will be better this year with Favre than they would with Aaron Rodgers. I’m not so sure.
You want to talk about distractions to a team? Few have ever faced this kind of media circus entering the season. While I keep hearing how the Packers could make a run to the Super Bowl with Favre, I can’t help but think this is all going to backfire on both him and the team. I’ve downgraded the Packers from winning the NFC North to finishing third or fourth. When your players and coaches are spending the preseason thinking about this, they’re not thinking about getting better.

Most everyone seems to want to point to his good performance last year as indicative of things to come. Not me. I look at the two seasons before that: 38 TDs, 48 INTs, 58.6% completion rate, 12 fumbles lost. I’m certainly not saying his numbers would be that bad this year, but even if they’re somewhere in between those and his 2007 numbers, say 22 TDs, 18 INTs, 60% completion rate, with that defense and running game, why not just go with Rodgers? My guess is, that’s exactly what the Packers are thinking. –Cyd Zeigler jr.