Will the NFL crack its glass ceiling?

Share All sharing options for: Will the NFL crack its glass ceiling? 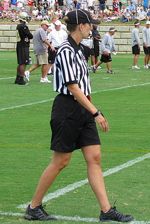 Take a close look the next time you watch the NFL, MLB or NBA. You won’t see a woman with a whistle in her hand, with the exception of one or two females who have broken through the male-dominated bastion of pro sports to work NBA games.

That’s why the appearance of Sarah Thomas at the New Orleans Saints training camp on Friday caused such a stir. Thomas, who last fall became the first female to officiate an NCAA Division I-A game, turned a few NFL heads during the scrimmage. For its part, the league wouldn’t say if they are scouting for their first female ref.

Her appearance, of course, prompted the hetero-macho, chest-thumping reaction you’d expect. But it was a nice distraction from the only other story out of the NFL since training camp started. Yeah, that guy. –Matt Hennie