Share All sharing options for: Hot footballers at Gay Superbowl

Every year since 2002, the national gay flag football championship has been held. This year, Gay Bowl 8 will take place Oct. 9-12 in Salt Lake City. I've heard a few players say they're psyched to go to the tournament because there's a notion that Mormon guys in Utah are hot. The local organizers offer proof . . . .

The guys of the gay Mountain West Flag Football League have joined up with Hunk du Jour to generate some buzz for the tournament with pictures of a couple of their hottest players. And we thank them!!! Full pic and links after the jump.

You can find lots more pics like this of gay footballers in Salt Lake City at Hunk du Jour. 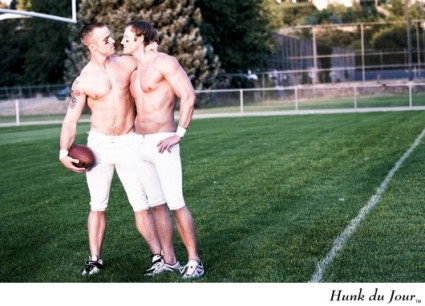