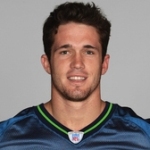 Not: Every week, I pick games against the spread on the Michael Irvin Show, and I'm putting them on our blog.

Well, my picks last week were a predictable 1-4 against the spread; but that’s what week 1 is made for. And Michael Irvin made me pay for it, especially for going against his beloved Dallas Cowboys. So, I figured, might as well do it again. This week, I saw more spreads I like than a Saturday night at Woody's, so I'm picking six . . .

San Francisco 49ers +7 at Seattle Seahawks
What team’s starting wide receivers this week are Logan Payne (right) and Courtney Taylor? The Seahawks.
Minnesota Vikings +2 vs. Indianapolis Colts
The Colts have their skill players, but their lines have taken a beating, with the latest starter cut for possessing marijuana. I wish I had Adrian Peterson this week in my fantasy league.

Denver Broncos +2 vs. San Diego Chargers
The Chargers lose Shawne Merriman; the Broncos add Brandon Marshall. Remember this name: Matt Prater. He’s the Broncos kicker and you will know his name this season.

Arizona Cardinals –7 vs. Miami Dolphins
Dolphins on the road after a big divisional game. The Cardinals are not the powder-puffs of old but have been made in the tough Ken Whisenhunt image.

Philadelphia Eagles +7 at Dallas Cowboys
Jim Johnson’s blitz packages should keep the Cowboys on their heels. Marion Barber will be the most important player to watch.

Tennessee Titans +1 at Cincinnati Bengals
Can Kerry Collins learn to just hand the ball off and let his running game and defense do the job?