One of the oldest gay-football groups in the world, Greater Boston's Friends, Lesbians and Gays (FLAG) Flag Football League is celebrating a decade of existence. The group was started by Robert Saurer, whom we met at the first Gay Superbowl in Los Angeles in the spring 2002. Saurer actualy has the distinction of being the first major injury at the Gay Superbowl: A broken arm (a picture of that after the jump). Boston's football group now has 180 members, and the Gay Superbowl, which takes place next month in Salt Lake City, now boasts 20 teams including the Boston Hancocks. 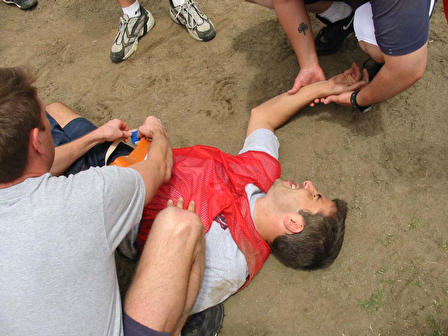