No condolences needed for Pats fan

Share All sharing options for: No condolences needed for Pats fan 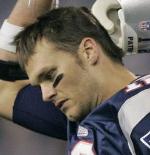 So much for 32-0. I've gotten at least 15 emails and text messages of condolences from friends figuring I must be crying in my apartment at the thought of a Patriots season without Tom Brady. I'd certainly love him to be there, with a legit shot of winning a fourth Lombardi Trophy and a chance to run the consecutive regular season wins record into the stratosphere.

But you know, I'm just not that bummed. It's the same reason I wasn't too disappointed about the Super Bowl loss in February. For a lifelong Patriots fan, the last seven years have been unbelievable. Truly, unbelievable. They've done virtually everything imaginable in football in those seven years. And yeah, I want to see them do more with Brady at the helm. But with such success has come stress. With solid teams like the Colts and Steelers and Chargers chasing them down every year, each game is potentially do-or-die. Now, with no expectations, every win will be a bonus. With three Super Bowl championships, a 16-0 regular season and a record-breaking offense in recent years, I'm kind of looking forward to cheering for an underdog for the first time in a long time.

Personally, I think the Pats will fall somewhere between 8-8 and 11-5 this year. They are one of very few teams that can potentially survive something like this because of their coaching and attitude. Hey, they're 1-0, which is more than you can say for the Colts and Chargers . . .