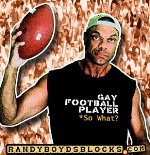 Randy Boyd has been a contributor at Outsports seemingly since the day we started. He's a former cheerleader at UCLA and is an author and outspoken advocate for gay and HIV rights. He's also a huge sports fan, and he offers his thoughts on a blog called Randy Boyd's Blocks. A recent post by him was a good man-to-man chat with straight athletes about lightening up on their gay teammates.

You've already pumped iron with a gay teammate. You've already taken a knee together and listened to Coach. You've already been sequestered together, eaten together, showered together, traveled together, dreamed of a great season together, made a commitment to working together as teammates for the greater good of the team. You're already survived practicing, studying, laughing, smiling, growing, indeed, living with and dreaming with men who think of themselves as gay, bi, homo, swingers, undecided, and so on.

Check out the rest of the post and read through his blog. He's an interesting guy and often has very interesting takes on issues.