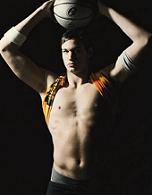 New York Knick's super-hot Danilo Gallinari, a rookie from Italy, is upset with his new team. Not only is the announcer using an Italian-like accent to say Gallinari's name during games, but when he scores a goal they play Italianesque songs like "That's Amore" and "Volare" throughout Madison Square Garden.

I what would happen if John Amaechi was out and still playing. Would the announcer suddenly start yelling "Heeeeeeyyy" and playing "YMCA" when the big man scored? And would gay fans be pissed or excited by it? If that was me, I'd love it. And I wonder what Eddy Curry would think.