Formula One boss accused of homophobia

Share All sharing options for: Formula One boss accused of homophobia 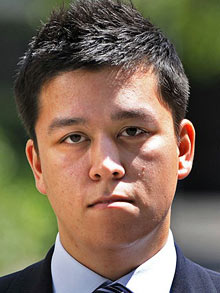 The boss of a successful British Formula One racing team is being accused of homophobia and racism in a complaint filed with a British employment tribunal. Peter Boland (right), 27, claims he was fired by McLaren Mercedes head Ron Dennis of firing him because he's gay. McLaren Mercedes is known for their driver Lewis Hamilton, who isn't just the youngest driver in British Formula One history, but also reportedly the first black driver (he's half black). Hamilton could be called to testify.

According to the Daily Star:

The hearing was told [Boland] was dismissed from his £32,000-a-year job in 2007 and the rumors [that he was gay] - allegedly spread by management - led to unwanted advances from a male colleague. Mr Boland is claiming unfair dismissal, discrimination on grounds of sexual orientation, victimization and post-termination discrimination against Ron Dennis and three of his companies.

The complaint also alleges that Dennis made anti-Arab remarks, namely that he needed to wash his hands after meeting with so many Arabs on a business trip. Oh the irony of calling a man who hired the sport's first black driver a racist.