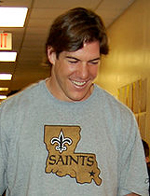 I hope he's right in his prediction, and I hope even more that it doesn't take that long. People could look at this issue without blinders on...the blinders imposed by their church, their parents, their friends or, in our case, their coaches and locker rooms.... I wish they would realize that it's not a religion issue. It's not a government issue. It's not even a gay/straight issue or a question of your manhood. It's a human issue. And until more people see that, we're stuck arguing with people who don't have an argument.

One NFL player supporting same-sex marriage is an anomoly; Two is quite nearly an epidemic. It's surprising but fantastic to see these guys take such strong, positive positions on a controversial subject that they could easily back away from.

I've long thought (and polls have shown) that the NHL would be the most supportive of a gay player because of the mixing of cultures. Fujita is a great example of that. He's white but was adopted at a very young age by a Japanese father and white mother. He was raised in a Japanese household and considers himself to be culturally Japanese.