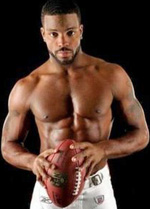 Cris Carter was spewing his infinite wisdom on ESPN's Monday Night Countdown tonight about new New York Jet Braylon Edwards. Carter's brilliant analysis included his cliche advice to the wide receiver: Choose whether you're an NFL player or a model, because you can't be both. The other chuckleheads nodded in agreement as though he said something worth a proverbial hill of beans. But this was in the middle of the group verbally felating Edwards' new quarterback Mark Sanchez...who is finding success as an NFL player and model, thank you very much.

Maybe Carter has forgotten about a certain two-time Super Bowl MVP who holds the single-season record for touchdown passes...and who happens to do five times as much modeling as Edwards and who is now married to a supermodel! How about a three-time NFL MVP who records more commercials than that AFLAC duck. And then there's the wide receiver who's caught the second most touchdowns in NFL history who shows of his hot bod to any camera with a flashbulb.