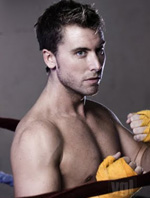 Out former pop star Lance Bass is the subject of a new photo spread by Branden Summers. The shoot took place in a boxing ring at Trinity Boxing Club in New York City. Apparently, it's meant to make Bass' image a little tougher, more "badass."

Does the former N'Sync star look at home in a boxing ring? Do you now suddenly think "tough, bruiser athlete" when you see Lance Bass? If you saw Albert Haynesworth on a diving platform, would you suddenly think, "slender?"

Coincidentally, I saw Bass at a taping of Dancing With the Stars a couple weeks ago. What was odd was watching the entire audience applauding...while only Bass and his friends sat on their hands. I mean, the audience was giving a standing ovation to the contestants, but Bass was too cool for school. When Paula Abdul showed up and sat next to him, he started politely applauding at times, but I wondered why he was there at all if he was just gonna sit there like a bump on a log. When he left 15 minutes before the show ended, shortly after he and Abdul were interviewed live, it answered my question. Abdul, the way, stayed for an hour after the show chatting with fans and signing autographs.