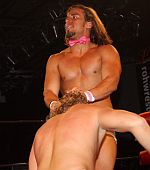 Scene from a Ring of Honor match.

Want to piss off some pro wrestling fans? Write that their sport is gay. In a "Best Of" list from the Village Voice, one of their writers was clearly having some fun when he voted the Ring of Honor pro wrestling circuit the "Best Place to Watch Straight Men Get All Homoerotic."

The item was clearly written in the spirit of fun while stating the obvious -- wrestling IS homoerotic, if not for the grapplers then for the audience. Many a gay man has grown up glued to the set watching hunky pro rasslers showing off in their tights. But the commenters on the Voice post were not pleased. Someone called The Butcher (who said he is "From Not Jew York," which tells you all you need to know about him) threatened death:

So help me God, If I ever find out who wrote this, I will f***ing kill you. Not just kill, I will torture you until you beg for death.

Snap! Other commenters were outraged to varying degrees ("If you ever show up to an ROH show, we're going to f*** you in your cute little skinny ass"), which means they took the bait. This prompted this nifty retort from a writer at the Cageside Seats wrestling blog:

ROH is very, very gay, and they should embrace that fact. An audience full of gay dudes would probably provide a much classier crowd atmosphere than most of the fans who currently go to their shows, too.

Just check out the hunks in the Ring of Honor's many photo galleries and you decide? Whether it's gay or not, it's at least pretty campy judging by some of the costumes.