Two bonehead coaches of the week

Share All sharing options for: Two bonehead coaches of the week 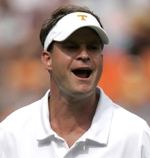 We used to hand out a weekly NFL bonehead coach of the week award. This week, college football's bonehead coach is easy; And the NFL's wasn't much harder.

In a road game at Alabama Saturday, Tennessee were within 2 points with about 40 seconds left in the game (this just moments after a successful onsides kick), and a complete pass got them to the Alabama 27 yard line. Kiffin had a decision to make: Get more yards behind a quarterback who'd completed 6 of his last 8 passes against a defense on its heals, or rely on a 44-yard kick from a guy who missed from 47 yards and had a kick blocked from 43. He chose the latter. Blocked kick. Game over. I feel badly for the players. They were out of the game and in the last few minutes dug deep to score their only TD of the game, get an onside kick, and march down the field. Then their coach took them off the field and stole the game from them. Shame.

In the NFL, the Falcons were down by 13 with about 9 minutes left at Dallas. They had 4th and 2 around their own 25 yard line. They hadn't stopped the Cowboys' offense since the first quarter. Like Kiffin, Falcons coach Mike Smith took his star players off the field (despite the pleading of Matt Ryan) and decided to punt. Patrick Crayton returned it for a TD. I suppose Crayton could have just as easily fumbled the ball and given it back to Atlanta. But with 9 minutes left, down 13, facing a 4th and 2 anywhere on the field, GO FOR IT!