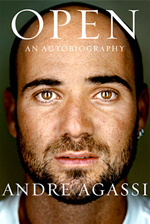 Andre Agassi drops a bombshell in his new autobiography, Open: An Autobiography

. In the book, he says he used crystal meth while he was still on the Tour. He also admits to lying to the ATP when he tested positive for the drug.

Some people are saying this undermines Agassi's legacy. I don't see how. I'm no fan of drug use, but this didn't enhance his performance (at least, I don't see how it could have). So he used drugs. He made a mistake and used a really dangerous, destructive one. If anything, I'm just a little sad to think what his career might have been like if he had been clean and sober; Federer may be chasing Agassi's Grand Slam record.

Order Open: An Autobiography from Amazon.com.