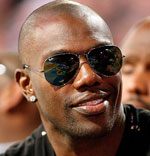 For some reason, CBS' "NFL Today" had the political pollster Frank Luntz on to dissect which players communicated well. Luntz was billed as a "language expert" for his use of meters to register how people feel when they watch other people speak.

In his dissection of a clip of Terrell Owens (in which the receiver scored very low), Luntz told T.O. to ditch the sunglasses and hat because millions of young people look to him as a role model and would start dressing how he did. He was then asked about T.O.'s earrings:

"That may work in San Francisco."

GLAAD is asking CBS for an apology:

In one breath, Luntz speaks of being a good communicator and role model, and in the next, utters a slightly-veiled gay joke. It's time that Luntz and CBS realize that men of all orientations wear earrings, that the LGBT community does not exist solely in San Francisco, and that the LGBT community can no longer be used as a punchline for tired old jokes.

I am less eager for an apology than for telling Luntz it's 2009, not 1979. Men have been wearing earrings for years and no one thinks it's gay. And the San Francisco line lost any snap years ago. As for T.O.'s wardrobe, if he thinks wearing sunglasses and a hat in public is the sign of a bad role model, he's more clueless than I thought. My guess is that T.O. scored low in the clip not because of how he was dressed but because he is seen as a me-first diva who has been a lousy teammate.

I have always thought of Luntz as a hack who is out of touch with how the country is changing and his lame attempt at humor demonstrates that.