Goalie fired after he boasts of hatred of gays

Share All sharing options for: Goalie fired after he boasts of hatred of gays 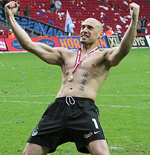 Polish soccer goalie Arek Onyszko gets my vote for Sports Idiot of the Year. He was released by his previous club in Denmark after spending time in jail for assaulting his ex-wife. He got a second chance from FC Midtjylland, another Danish club, which warned him to not continue writing a book he was working on. He ignored that warning and finished the book, called "F-king Polack" In it, he professes his hatred of gays. From Pink News:

"I hate gays, I really do. I think it's f**king disgusting to hear them talk to each other as if they are girls. I can't be in the same room as someone who's gay. Look at them kissing each other - it's sickening."

Asked why he hated gay people, Onyszko said his Catholic beliefs made it impossible to "accept those kind of people."

Onyszko was offered another job with a Copenhagen team, but that was withdrawn after the team's chairman discovered what was in the book.

Sports by Brooks says that Onyszko would be luckier if he was an American athlete:

If this were America, of course, he'd just go into rehab for alcoholism or something or other then issue a non-apology that says he never meant to offend anyone and we'd all go off on our way. Fortunately, we're to be spared that charade.