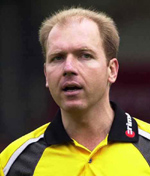 Through Mr Eulberg's behaviour it's not only the smooth running of a sporting event that is brought into question but also the idea that everyone can live in society with the respect of others.

The incident's being investigated by the German Football Federation. But what I can't figure out is if Schalk is in fact gay. Either way, good for him for helping rid sports of this gross anti-gay language.